XPO’s Human Resources Director Donna Lenahan is trying to use her sex appeal to sell you on their garbage medical package. She goes around hugging us, flirting with us, talking about how she’s single and likes to brag about being a Harvard graduate. We need an acceptable medical plan. XPO should be ashamed to employ this cheap bimbo. She’s just another devil that doesn’t care about us. She’s disrespectful and can’t be trusted. 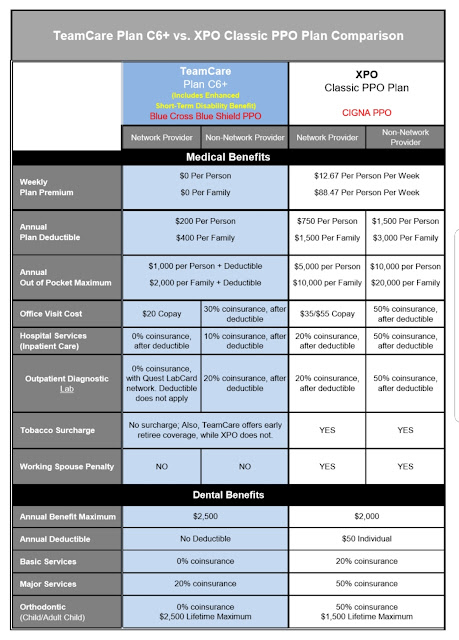 Posted by Conway/XPO Employees at 9:45 PM

Teamcare is the Teamsters healthcare plan being negotiated at union terminals. We will work better and greater when we say union yes. Stop sitting on your asses, don't wait for other terminals to get the work done for you. We need you, that's why XPO is dragging their feet negotiating. The time is now to stand up and be heard. Come on, we can do this, let’s get a Teamster contract now!!!

Time to wake up people. This company is only concentrating on how to save a penny and lay people off! No one in this company knows what the fuck is goin on

Or what the hell they are doing!

USB we need your support lets get it goin. Lets prove Donna And people with Suits that we run this company not them.

Um...just looked that cow on Facebook. No level of flirting came overcome that level of fugly.

The Union needs to come down to the USB terminal

Start collecting names,addresses and phone # of your fellow coworkers supporting union representation,don’t forget we”xpo” employees are the union,teamster is the organization representing us

Voluntary layoffs were offered to employees in seniority order and the least senior dock workers were laid off if there were no volunteers.

Usb here we need the Union now not later

Lets get the ball rolling XKC. Tired of HR coming and not doing s#%t to help us.

At ULA Yesterday they ad 5 purchase trailers to take our freight 3 for up north and 2 for east that cut us 5 runs so now we only drive less than 100 miles if some get lucky to drive but not only us they did it to usb too and some other terminals. At the bigening of the year they told us that we were going to run our own freight now they change their minds this company likes to mess around with pure money and oure time.but we do not got the balls to do something about it.because if someone do something about it the rest of the workers would not get you’re back.

Little man is gone in xpn but keeps on giving,their so called profit sharing for 2018 was in and what joke,incomprehensible how drivers of this company just keep takin up the ass.

A whopping $51 dollars for my yearly bonus! Thanks a lot XPO

How much did Brad Jacobs get for his bonus

$23 Dollar bonus raise through the system

$23 Dollar average raise And the US.

Thanks a lot little man! I guess I can buy myself a pizza with my bonus

XPO Drivers lets wait and see what ridiculousness they come up with next. Company changes the bonus structure to their benefit to set us up for failure while the top gets fat. So much for taking care of us! Jacobs you have made a joke out of this company and all of us who used to proud to work here.

ULX management is lying about teamcare, the healthcare proposals being negotiated by teamsters. We will save money, get better coverage with teamcare, and will provide medical coverage for 5 years to spouse and kids in the event that XPO employee dies.

Work hard for what 76.08 in bounos my wife asked me if l had another bank account she could not believe it she thought l was keeping for myself 😒

Bonus is based on ur terminal performance

Why are we letting this happen. Jacobs laughing all the way to the bank off our backs.
He gets 170+ million back from tax breaks
He raised his salary 481%
He sold truckload for $588 million
He go a $20 million equity bonus
He got that $110 million stock bonus
He became a Billionaire
He won't bargain great healthcare for us at no cost to us or no new cost to him
We lost PTO
He's spending $2.5 billion of our money buying back our own stock which benefits him
We can't get a bonus of three figures.
WAKE UP

Teamsters this is your time company is fucking up let go teamsters lets go we can do it. Don’t you find it odd how we keep loosing more and more? Pension, benefits, bonus, PTO, our CONWAY Legacy.... and now all these layoffs

I completely forgot about this site. Shame on me. If you guys at ULB, ULA ULX are serious, do some ground work for your local. The IBT only has so many organizers and I promise you that they will stand with you full force if you can show them you're serious. Form a committee and rate your members from 1 to 5. The 1's are drop dead all in and nothing can change their mind. The 2's are almost all in and can be counted on in a pinch. Forget the 5's...nothing you do or say will ever change their mind. It's the 3's and the 4's that to must focus on. Most of these guys are unaware of what the company has taken from you since the buyout. Some don't even know about Teamcare. If you can get 60 to 65% in your 1's and 2's, organizers will come to help you finish the job. Come on over to the Trucking Boards and hit the XPO union forum. PM me and I will do whatever I can to help. I will speak to any and all of you to help you get started. There are videos and posts from XPO exposed and Express 1 Team Talk on Facebook. We have to start this by ourselves. It's our union and we need to give our union a helping hand to get the ball rolling.You have to be serious and willing to put some time into this or it will wither and die. With the possibility of an Amazon buyout, NOW is the time to act and protect what you have now. There is no risk and no investment other than time. If you aren't satisfied with the Teamsters, you can always go rihght back to where you are now.