Members of the National Taxi Workers Alliance receive their AFL-CIO charter. A union is a democratic organization of employees in a workplace who choose to join together to achieve common goals. By forming unions, employees can work collectively to improve working conditions, including wages and benefits, hours and job safety, to resolve disagreements of employees and employers and to find the best ways to get the work done.Unions also represent members and all people who work by advocating working family-friendly laws and policies through legislative and political action. Most people who work in this country have the right to form and join unions under the 1935 National Labor Relations Act (NLRA), which encourages union formation. Yet millions of workers, such as farm laborers, domestic workers and managers, are not covered by the NLRA. Many of them, though, are organizing and partnering with the AFL-CIO to gain workplace rights.
Posted by Conway/XPO Employees at 6:50 PM No comments:

Wal-Mart doesn't seem to have a lot of friends as lightning strikes and walkouts spread throughout the country in the past few weeks. The Naked Capitalist yesterday ticked off the actions (overlooked as usual by the mainstream media) taken in support of the workers. She commented, ...nobody in the press seems to be quite sure how big this thing is.

Here are some clues:
The opening of a Walmart Neightborhood Market in San Ramon last month is one of the reasons some Walmart workers went on strike at five Bay Area stores on Tuesday, union organizers said.

...there have been protests in Dartmouth, Raynham and Fall River the past few months over Walmart's labor practices.

About 75 South Florida Walmart employees on Thursday joined the hundreds nationwide that have staged protests outside Walmart stores and corporate headquarters over the past few days.

Raw Story explains how the Wal-Mart walkouts show why conservatives should support unions: They allow workers to bargain for living wages so they don't have to depend on the government. One of the problems striking workers cite is the lack of access to full-time working hours, which prevents them from obtaining even the meager health benefits the company offers. The National Consumer’s League (NCL) told Raw Story that Walmart’s refusal to provide those benefits by exploiting part-time labor leads to a number of spillover costs that taxpayers ultimately pick up. “Many Walmart workers are dependent on public assistance programs due to their low wages and not having access to full time jobs and being denied benefits because they’re not working the number of hours required to get access to those benefits, or the benefits are just so expensive that on their low wages they just can’t afford them,” NCL Executive Director Sally Greenberg said in an exclusive interview. “Walmart has a record of even working with employees to sign them up for public assistance programs, which we think is really atrocious.” She added that Walmart’s position of keeping wages low in order to pass the savings along to consumers doesn’t wash either: “Companies that pay a decent wage and provide benefits to their workers help create a middle class that is able to buy the kinds of products that Walmart sells,” Greenberg explained. “It is actually a plus for companies if they provide fair compensation to workers. It’s also better for consumers when they’re able to actually afford housing, healthcare and have access to benefits of the kind we think Walmart, with all its success and profits, ought to be able to pay workers.

Posted by Conway/XPO Employees at 2:45 PM No comments: 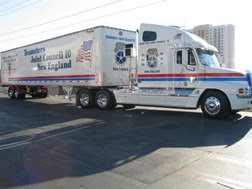 We fill their trailers with donations and then we drive them to Northern Maine. Maine Teamster THUGS (Those Helpful Union Guys and Gals) are coordinating with Catholic Charities to get two trailers from southern to northern Maine next week, carrying donations to benefit those in need. The Joint Council 10 truck will do the hauling. Here's an email from a grateful Dixie Shaw, program director for Maine Catholic Charities Home Supplies & Food Bank: This is the second happy dance this year thanks to the Teamsters! First we had the record- breaking food collection that the Teamsters did in July and now a mere two months and two weeks later! Another happy dance as you all come to the rescue of our poor often forgotten County up here at the top of Maine!!!! I had such a challenge ahead of me. We received some grant money to purchase two trailers which we got in Scarborough for a great deal but now we needed to get them to the County! I called all my resources, some of my personal friends with trucks, you name it, and I pretty much had tried it until last Saturday when who should happen in my path but Traci Place and Teamsters Local 340. I thought, hmmmm I wonder? Well now you look! We have a coordinated effort that not one but both of the trailers will be hauled back to the County by the Joint Council’s beautiful truck. Everything we do is to ultimately Feed The County and this is a BIG DEAL to us. Thank you Teamsters 340 for all you have done for the people of Aroostook County.
Posted by Conway/XPO Employees at 11:42 AM No comments: