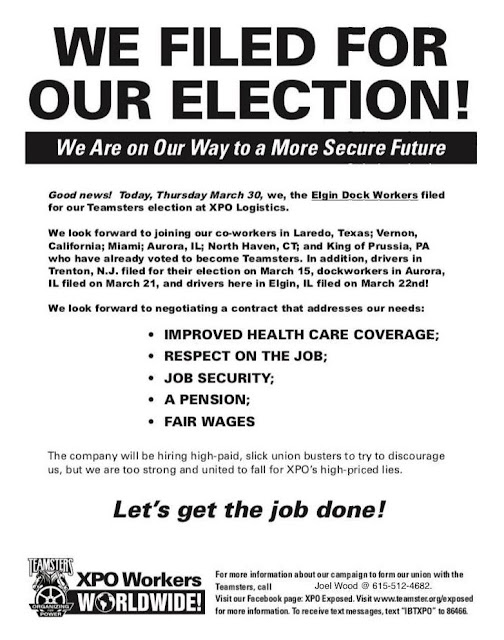 Please forward and share with all immediately! It's time to stand up and rally around our co-worker Tommy Bower.

Attention Trenton drivers,
in case you didn't know, last night the union buster became very aggressive in the meeting, throwing his paperwork and books, jumped around the table, and got directly into Stan's face. The union buster was inches from Stan's face violating his personal space and proceeded to verbally attack Stan. The same incident occurred with Tommy last week but this time when Tommy came out of the meeting he felt sick.  He was taken to the hospital and they told him he had suffered a heart attack.  This goes to show how desperate the company really is, trying to keep us from having a voice and voting YES on April 14th.

Bruce RyanPS: Our prayers go out to Stan and his family to that everything will be fine. Amen.
Posted by Conway/XPO Employees at 3:05 AM 28 comments:

https://teamster.org/news/2017/03/xpo-logistics-drivers-trenton-seek-teamster-representation
(TRENTON, N.J.) – Drivers at XPO Logistics in Trenton, N.J. filed for Teamster representation today, the latest action by workers across the U.S. who are banding together to fight for fair treatment at one of the largest transportation and logistics companies in the world.
The 33 drivers at the former Con-way Freight want to join Teamsters Local 701 in North Brunswick, N.J. and are planning to join workers in Miami, Laredo, Texas; Vernon, Calif.; Aurora, Ill.; North Haven, Conn.; and King of Prussia, Pa. who have already formed their union with the Teamsters.
“The freight workers in Trenton are united, strong and focused on forming their union with the Teamsters so that they can address the issues that are important to them -- better and affordable health insurance, retirement security and a voice on the job,” said Ernie Soehl, Director of the Teamsters National Freight Division and President of Teamsters Local 701.
“The XPO drivers in Trenton have worked hard to get to this point and they are excited to be part of the workers’ nationwide campaign that is gaining momentum,” said Ron Lake, Secretary-Treasurer of Local 701.
Port, freight and warehouse workers at XPO are coming together across the country in their fight for a more secure future.
Founded in 1903, the International Brotherhood of Teamsters represents 1.4 million hardworking men and women throughout the United States, Canada and Puerto Rico. For more information, please visit www.teamster.org
Posted by Conway/XPO Employees at 2:56 AM 78 comments: