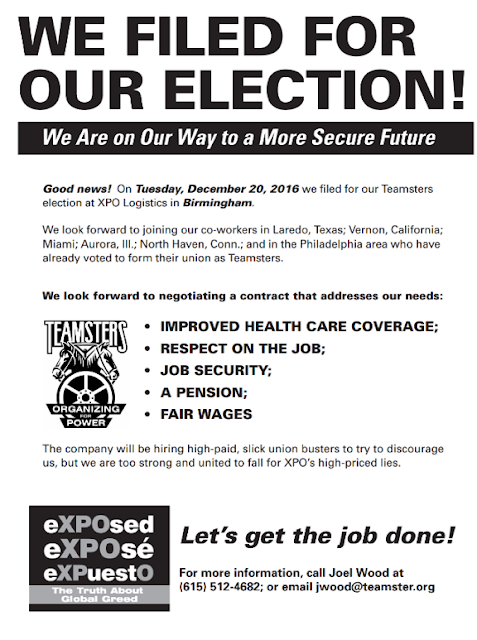 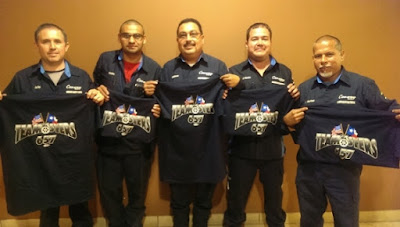 A federal court has denied XPO/Con-way’s latest attempt to delay the decision by workers in Laredo, Texas to form their union as Teamsters with Local 657.
The United States Court of Appeals for the Fifth Circuit rejected the company’s petition for review of an order of the National Labor Relations Board requiring the company to recognize Local 657 as the workers’ bargaining representative. The workers voted to form their union as Teamsters in September 2014.
“The court has rejected yet another attempt by XPO to delay justice to these workers,” said Frank Perkins, President of Local 657 in San Antonio. “The company can appeal to the U.S. Supreme Court, but we think that is unlikely in this case. We demand that the company respect these workers’ wishes and begin bargaining a contract soon.”
Posted by Conway/XPO Employees at 12:21 PM 45 comments:

James Hoffa is keeping the pressure on XPO

(WASHINGTON) – Today, in a letter to XPO Logistics’ [NYSE: XPO] Board of Directors, the International Brotherhood of Teamsters raised objections to the company’s proposed 2016 Omnibus Incentive Compensation Plan (the Plan) that could provide a windfall stock award for CEO Bradley Jacobs worth $110 million at current stock price levels.
At a special meeting on December 20, 2016, XPO shareholders will vote on the proposed plan which reserves 3.4 million new shares and increases the individual annual equity award limit from 500,000 shares to 2.5 million.
Absent an amendment to the Plan that would set a moderate and reasonable individual award limit, the Teamsters will vote against the Plan and recommend fellow shareholders do the same.
In the letter to XPO Lead Independent Director Michael Jesselson, Teamsters General Secretary-Treasurer Ken Hall notes that the Plan as proposed could allow the board to award Jacobs compensation that is 160 times his base salary and five times the target value of the equity award he was granted under his new employment agreement, which is designed to cover the four-year term of the new contract.
Hall also questions the efficacy of the plan design to incentivize management. In the letter Hall states, “We believe the board would have ample room to incentivize and retain executives with a lower limit, particularly considering the new plan also doubles the maximum, annual cash award payable to any individual to $10 million. Moreover, with CEO Jacobs already holding 15 percent of common shares, it is not clear to us that large equity awards are required to retain and incentivize his services.”
“Under no conceivable scenario is a payout of 2.5 million shares to CEO Jacobs, the company’s largest shareholder, justifiable,” Hall said. “The board has lost sight of one of its prime responsibilities—establishing sound executive pay practices that incentivize performance and protect the interests of shareholders.”
Founded in 1903, the International Brotherhood of Teamsters represents 1.4 million hardworking men and women throughout the United States, Canada and Puerto Rico. Visit www.teamster.org for more information. Follow us on Twitter @teamsters and “like” us on Facebook at www.facebook.com/teamsters.