http://m.motherjones.com/environment/2016/12/our-new-labor-overlord-thinks-workers-shouldnt-get-breaks
But this isn't some exotic new political creed introduced by Trump. It's warmed-over Republicanism. 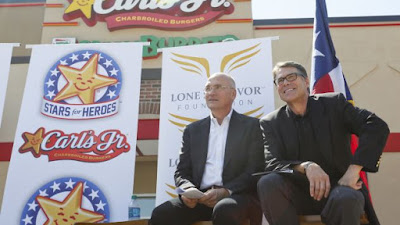 Ladies and gentlemen, your new labor secretary, burger magnate Andrew Puzder, left, and your new energy secretary, former Texas Gov. Rick Perry. Jack Plunkett/AP Images for Carl's Jr.
The US Department of Labor exists to "foster, promote, and develop the welfare of the wage earners [and] job seekers," and to "improve working conditions" and "assure work-related benefits and rights." Andrew Puzder, Donald Trump's choice to lead the department, has not exactly embodied those values in his career as CEO of CKE Restaurants, parent company of fast-food chains Hardee's and Carl's Jr. He's a staunch and vocal opponent of minimum-wage hikes, and his company has had to pay out millions of dollars to settle overtime claims (more here).
"Have you ever been to a fast food restaurant and the employees are sitting and you're wondering, 'Why are they sitting?'" Puzder asked. "They are on what is called a mandatory break."
Continue reading at...http://m.motherjones.com

In a recent arbitration, reinstatement and back pay were secured for a Teamster who was wrongfully terminated from Bay Valley Foods in Dixon, Illinois. The Teamster is returning to work with more than $79,000 in owed wages and full benefits thanks to the efforts of Local 722 President and Principal Officer Steve Mongan.
In the award, the arbitrator concluded that “no just cause for any discipline was proven.”
“It was justified in getting an improper termination rescinded and making this worker whole. It was so wrong what Bay Valley Foods did and how they did it, she wasn’t deserving of anything like this,” Mongan said. “I’m glad that the arbitrator saw through the smokescreen and ordered her back to work with all rights restored.”
Local 722 -located in La Salle, Illinois- has won all nine of the grievances it took to arbitration in 2016, Mongan reported. This was the third and final arbitration at Bay Valley Foods in 2016.
Posted by Conway/XPO Employees at 12:46 PM 68 comments:

Birmingham, AL withdrew a petition for union elections due to scare tactics and lack of information. We will not fold and go away, we will petition once again in 6 months.  We are going to use this time to better inform and educate ourselves. Let's hold our heads up high for Birmingham. Getting this far is an accomplishment in itself. We will show them that even in the anti-union South, we can unionize!
Posted by Conway/XPO Employees at 3:40 AM 28 comments: