Read this. This is the type of company that we work for now. If they can do this to our service men....do u think they care for any of us!!!


Department of Justice
Office of Public Affairs
FOR IMMEDIATE RELEASE
Justice Department Files Lawsuit Against Con-Way Freight Inc. to Enforce Reemployment Rights of Temporarily Disabled Servicemember
The Department of Justice filed a lawsuit today against Con-Way Freight Inc. alleging that the company violated the Uniformed Services Employment and Reemployment Rights Act (USERRA) by failing to promptly reassign Naval Reservist Dale Brown to his former position as a driver with appropriate seniority once he notified the company that he had fully recovered from a temporary service-related medical disability.
According to the complaint, filed in the U.S. District Court for the Northern District of Illinois, Brown began working for Con-Way on Nov. 9, 1987, as a driver sales representative (DSR).  In 2006, Brown was working at Con-Way’s Rock Island, Ill., facility when he deployed for active duty.  While in Iraq, Brown suffered a serious shoulder injury in a truck accident during a night mission and returned to Con-Way in 2009 following an honorable discharge.  Con-Way placed him in a lower-paying position due to medical restrictions that prevented him from returning to the DSR position.  By 2012, Brown had made a full recovery and notified the company that he was able to resume work as a DSR without medical restrictions.  Con-Way refused to return Brown to the DSR position and instead made him apply for open positions as they became available.  Months later, Brown was eventually hired as a DSR, but, Con-Way treated him as a new employee with no seniority to bid on assignments.  As a result, Brown effectively received a 40 percent reduction in pay compared to what he was earning as a DSR prior to his military leave.  He also no longer has a regular work schedule because his seniority was not restored upon resinstatement and he must call in each day to see if and for how long he will work on a given day.

USERRA obligates employers to promptly reemploy returning servicemembers and place them as near as possible in the position that they would have been in absent military service, or a position of similar seniority, status and pay.  For servicemembers like Brown who return with a service-connected disability, the reemployment obligation extends to providing accommodations to the servicemember, which can include a temporary position until the servicemember has recovered and is able to return to his or her proper reemployment position.  Contrary to these requirements, Con-Way violated USERRA by treating Brown as a newly hired DSR, with no accrued seniority, rather than placing him in the position that he would have held had he not served his country and suffered a serious and debilitating injury that required temporary accomodation.

The lawsuit seeks an adjustment to Brown’s seniority date as a DSR to his pre-deployment date with back wages for Con-Way’s six month delay in reemploying Brown once he asked for reinstatement as a DSR following his medical clearance, and his inability to bid on desirable shifts and routes due to his lack of seniority.

“Employers have a legal obligation under USERRA to accommodate servicemembers who suffer a disability while serving their country,” said Acting Assistant Attorney General Jocelyn Samuels for the Civil Rights Division.  “The Civil Rights Division is committed to protecting the rights of those who have served their country through military service.”

This case stems from a referral by the U.S. Department of Labor (DOL) following an investigation by the DOL’s Veterans’ Employment and Training Service.  The case is being handled by the Employment Litigation Section of the Civil Rights Division.

Additional information about USERRA can be found on the Justice Department website’sServicemember page and Employment Litigation Section page, as well as on the DOL website.
14-305
Civil Rights Division

Posted by Conway/XPO Employees at 8:00 AM 5 comments:

As a vote approaches in Laredo, the company is telling workers that if they go on strike they can't collect unemployment, food stamps, or any other social services. These are lies and as the vote keeps getting closer they will find other lies to try and scare employees into voting the union down. Don't be fooled! Think about why they are fighting so hard to keep us from unionizing. They don't care about us, the only thing companies like to care about is money. The union will restrict them from stealing from us, from abusing us, and from intimidating us. This is about money and power. They don't want to have to answer to anyone. Let's stand strong in Laredo and show them that the old Conway policies stop now! We are not alone in Laredo, other terminals are on the brink of filing petitions with the NLRB to vote. We are getting closer to getting the union in! 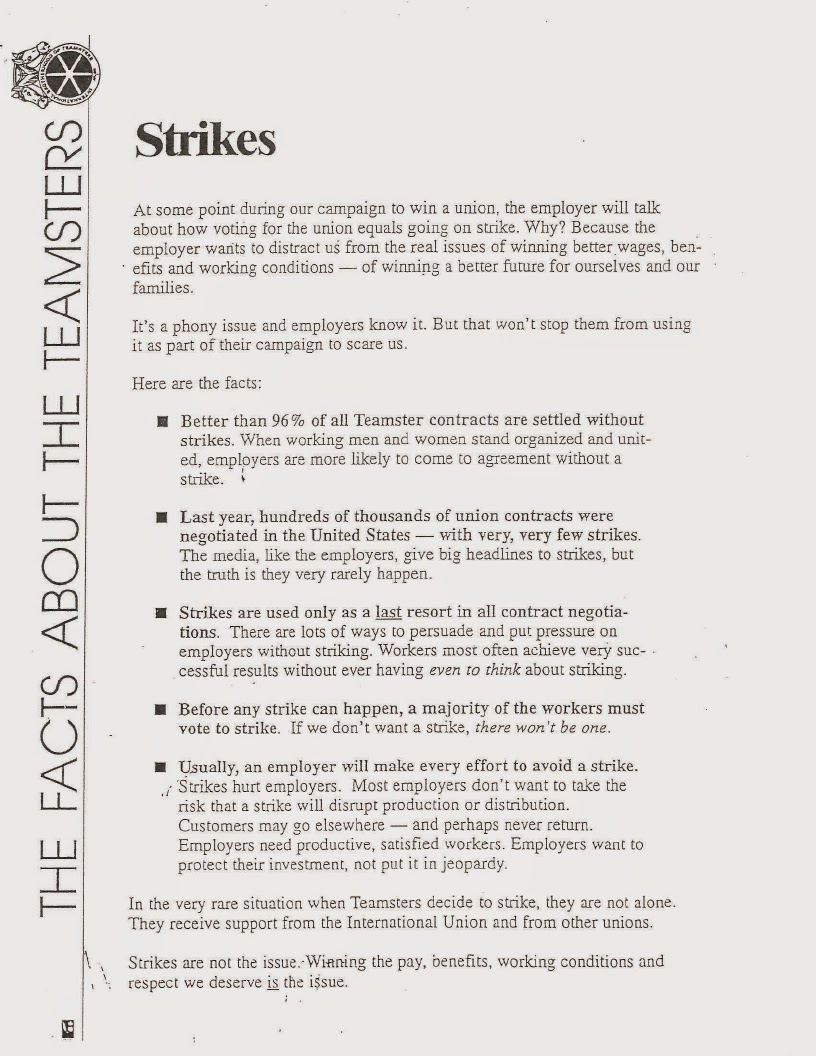 Posted by Conway/XPO Employees at 10:04 AM 4 comments:

I will donate my 2 cents on why these drivers are leaving in groves ... This place is ran by non-experienced rookies , they belittle, discourage, disrespect, look down upon you , degrade your character, demand respect, spit in your face (sarc) , no integrity, lie, more lies ,vengeful , cowards , intimidate with the threat of an LOI, loss of retirement ,'401k , insurance, vac, steal lunch breaks, hook time, fuel time, dock time , forced to use to use the 16 hour rule all the time, change rules on a whim, accuse without evidence , fire at will , and did I mention intimidation by the use of Fear tactics? , lack of credibility , and lastly this company is using massive amounts of subservice which eliminates the use for our road drivers ... So there ya have it they are stealing our jobs and our future all for big profits and bonuses for a select few without any remorse or reguards to the employee that built this company ! Vote "Yes" LAREDO

Laredo, TX is more than just another terminal for Conway. It's one of the busiest and most profitable in the system. They move up to 1,200 shipments per day and generate 6% of profit for the company. So how can a company that makes so much money and has their employees produce at record rates not be sharing the wealth with the people that make it happen? Every year, we are producing more and getting less compensation. They may make it appear that we get raises, but whatever they do give us, they take away from somewhere else. In the last quarter Conway made over $40 million in profits. Yet, they can't provide cheaper medical benefits for us, they can't provide a pension, they can't even provide full-time jobs anymore. We get treated as if we were working in a third-world country. Laredo is the front line of the union movement at Conway! This past friday they sent a petition to the NLRB to gain union recognition. That same day the drivers out of Laredo that ran to San Antonio FAC were segregated from the other drivers. They are trying to contain the movement, they don't want Laredo drivers to inform employees from other terminals. It's okay, they will get informed and once business is taken care of at Laredo, the other terminals will be clamoring to have a union just like Laredo! 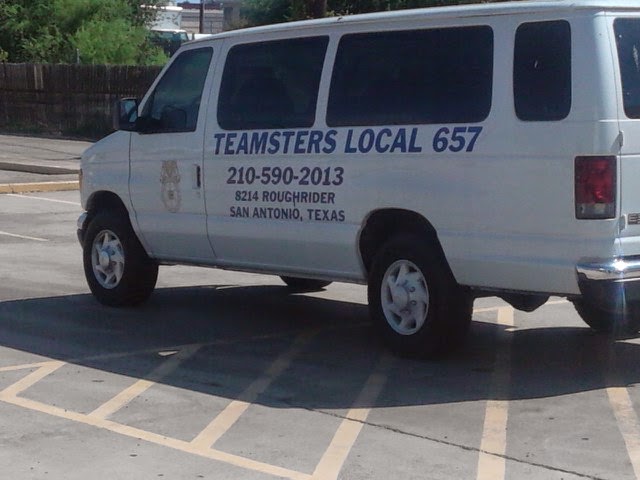 This is a very good website. It answers a lot of common questions that are brought up, during a organizing campaign. http://unionbustingplaybook.com/

Posted by Conway/XPO Employees at 11:36 AM 2 comments:

Anti-union Well and Alive at Laredo 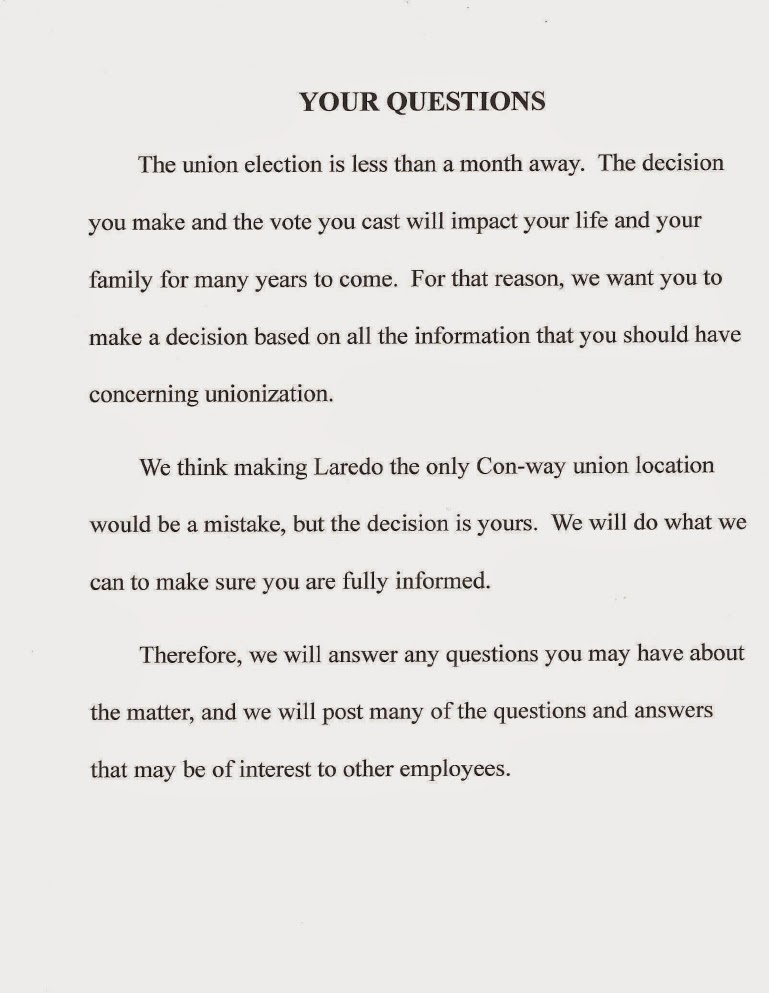 Vote “yes” don’t let this anti union tactics scare you. Voting “yes “will impact our life and our families in a positive way if we get a pension and better health benefits

Laredo will not be the only location unionizing there’s no mistake. California, Oklahoma, Virginia, Alabama, Washington and others to come

This comes from a Teamster that has accumulated 8 years in a pension plan. Notice that he has accumulated close to $12,000 a year upon his retirement. Meaning that if he chose to stop working for this union carrier right now, he would get $12,000 a year once he meets requirements and decides to retire. This employee will keep putting more money into his pension and should he keep employed and get to a 30-year career he could retire with close to $40,000 a year coming in after retirement. How's that 401k looking now????? 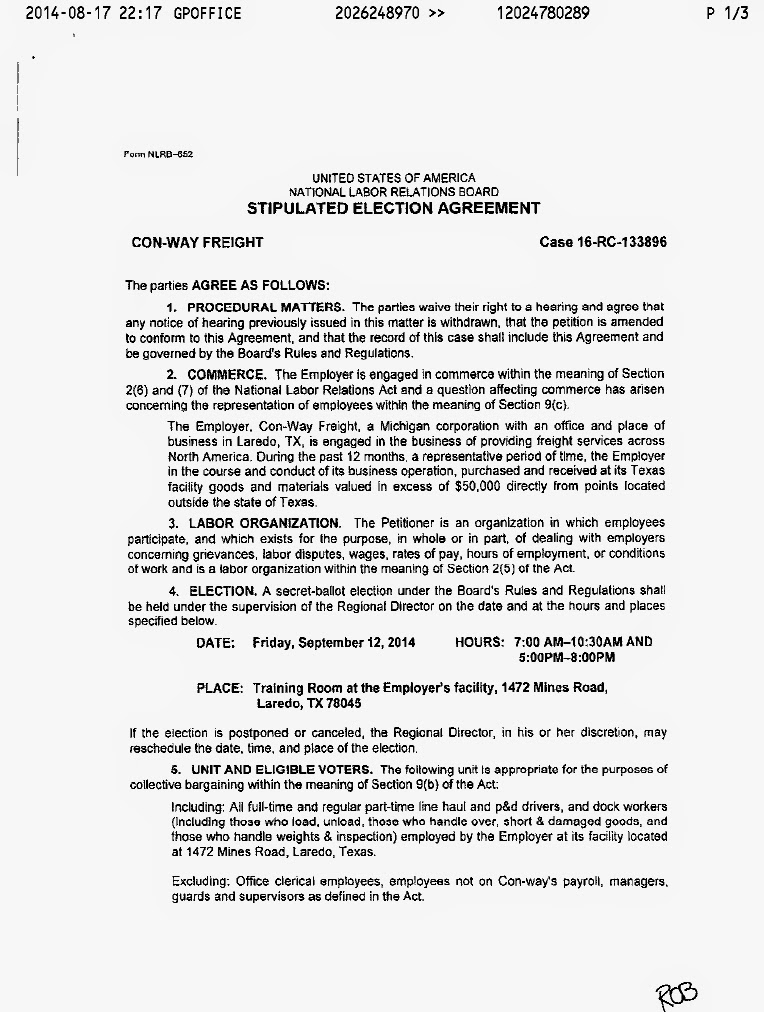 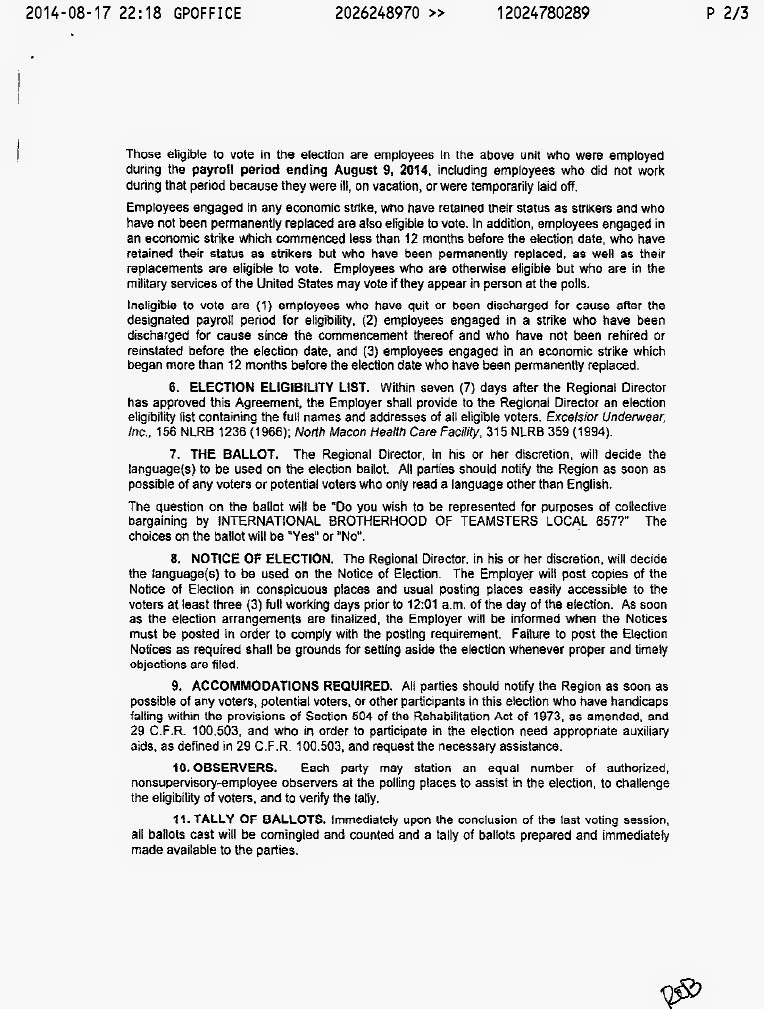 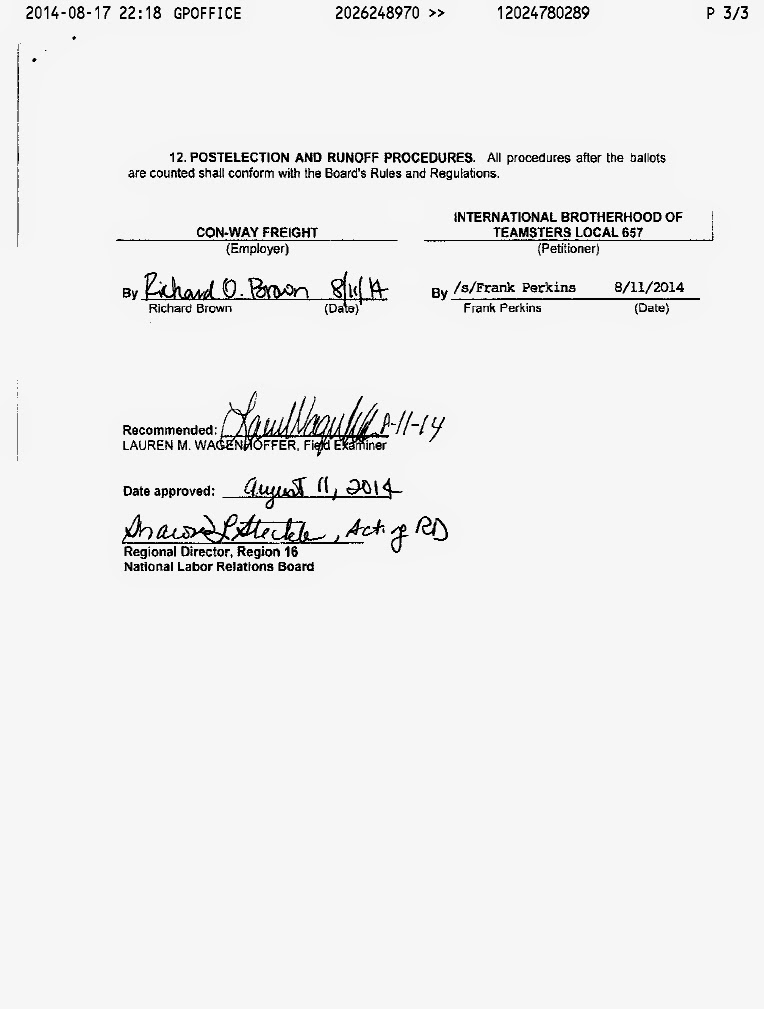 Laredo, TX employees recently signed cards to petition the NLRB for union representation. The LSX terminal in San Antonio held a meeting with their employees to tell them that the employees at Laredo who signed cards didn't know what they were signing because they don't know how to speak, write, or read english. They're trying to play the race card to persuade their own employees not to do the same thing. Conway is scum and we must remember that when they spew their lies. This is not an issue to do with race, this is an economic issue. This is about us fighting back against Conway's corporate greed. Let's keep this in mind when we vote at Laredo on September 12th. 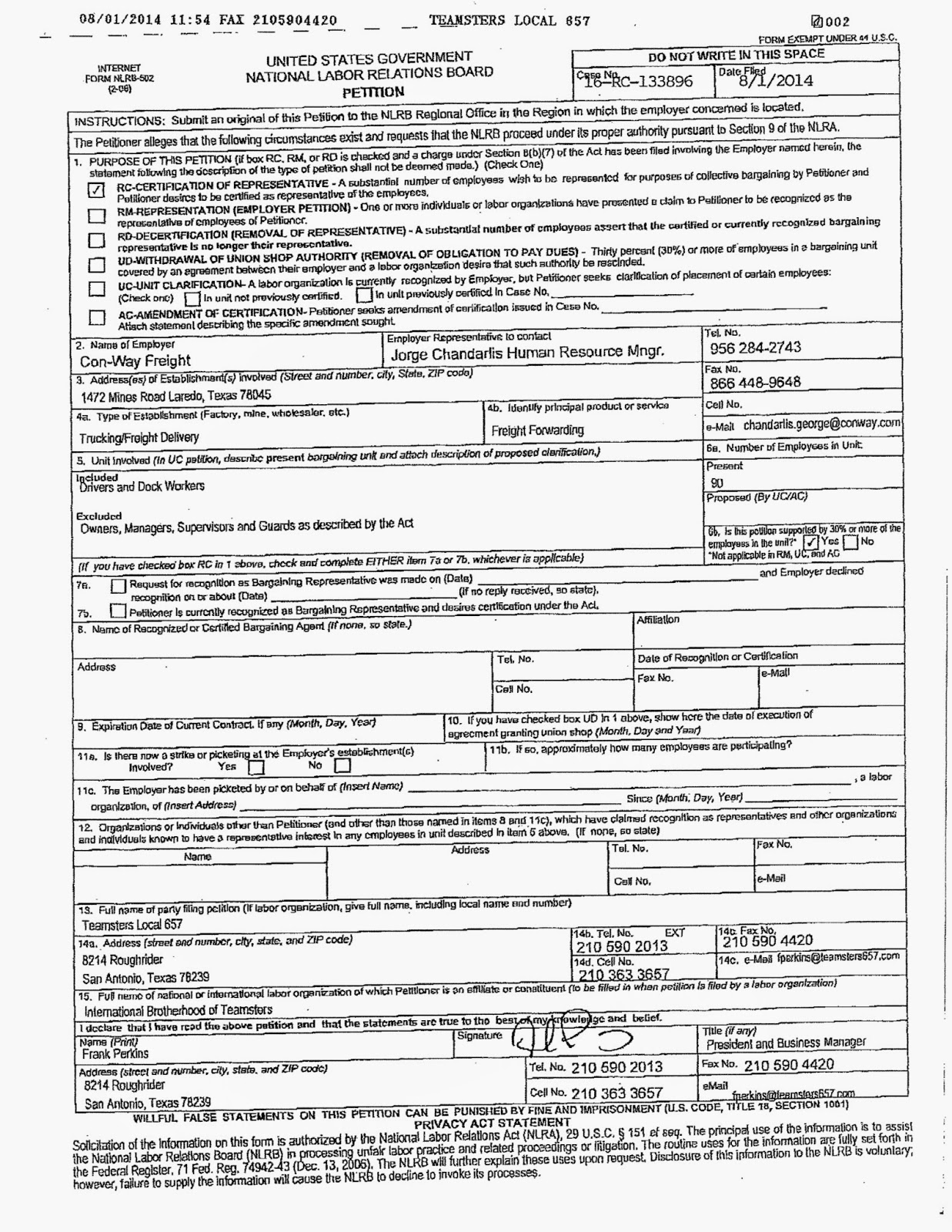 Posted by Conway/XPO Employees at 6:25 AM 7 comments:

Good news for our movement! Next month the Laredo, TX terminal will have an election to gain union representation! It's taken a long time to get to this point but we are here. This is the time when we have to be the strongest. Conway will come out in full force to try and sway our votes. They will sweet talk us, say they will give us the world, heck, and they might even offer us money to vote the union down. These are all false promises. If we fall for their lies and don't vote the union in, we can expect them to clean house and most of us will be out of work. We are not alone in this fight; a FedEx Freight terminal in New Jersey is also going to be voting soon. They're in the same boat as we are. This is the start of something big at both companies! Time to start taking back what is ours! 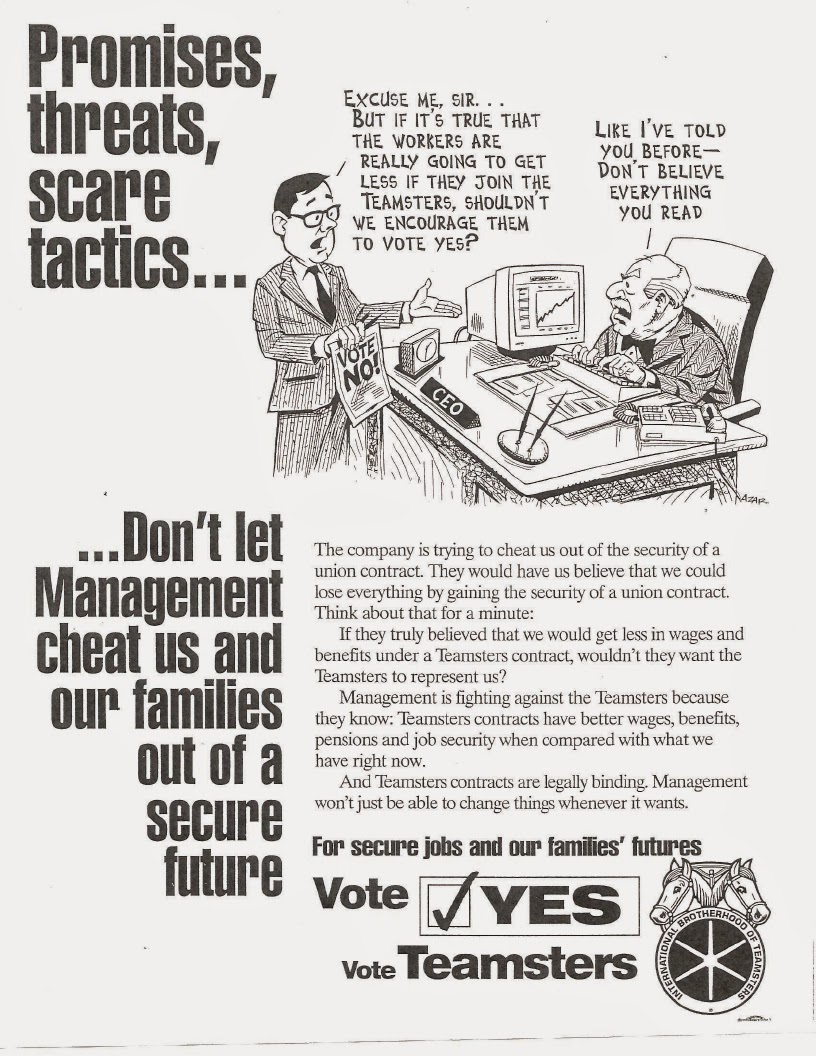 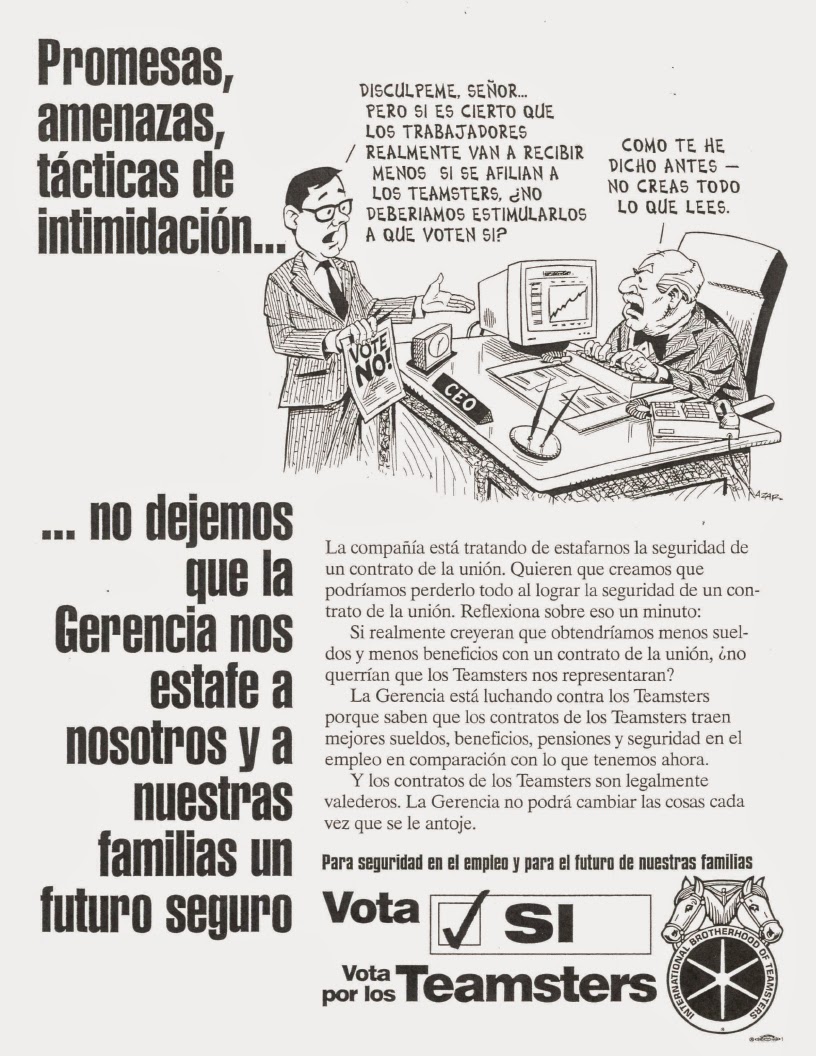