Here's how a union creates jobs 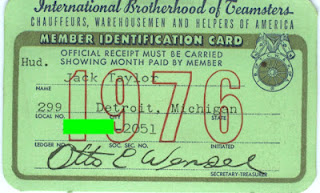 Jack Taylor posted his dad's union card from Teamsters Local 299 on our Facebook page. His message was so important we're sharing it here too: I was cleaning up old records from my parents house today. I came across my dads membership card to Local 299 signed by Otto Wendzel. Thank you Teamsters for helping my dad to provide me with a good home, food on our table and a college education. Without the unions my dad would never had been able to do all of that with an eighth grade education. He was never rich, but he was paid a fair days wages for a fair days work. Thank you Teamsters........ I will always be a union man even though I'm not an employee but an employer and job creator. Thank you, John.
Posted by Conway/XPO Employees at 2:01 PM 1 comment:

Thanks to the Teamsters, CDL drivers can go to traffic school.

Teamsters Sponsored Bill Signed Good news. One of our sponsored bills was signed.

AB 1888 (Gatto) would allow commercial drivers who get a ticket in their personal vehicle to attend traffic school every eigthteen months to eliminate a "point" from being placed their driving record.

This is a big deal because federal law, until recently, prevented commercial drivers from in any way masking citations or attending traffic school. The US DOT issued an advisory opinion allowing states to let commercial drivers who get a ticket in their private vehicle (not the commercial vehicle) to eliminate the point associated with the violation by attending traffic school. This could stop a driver from sliding into "negligent operators status," which could result in a license suspension and loss of employment.

We actually co-sponsored this with the California Trucking Association, in a rare show of labor-management cooperation.

Posted by Conway/XPO Employees at 8:47 PM No comments:

Should the 401(k) Be Reformed or Replaced?


Posted by Conway/XPO Employees at 7:13 PM No comments:

Presented an approach for the detection of fatigue based on biosignals acquired from the driver electroencephalogram (EEG), electrocardiogram (ECG), electrooculogram (EOG), and video monitoring. The majority of relative works is based on in-lab experiments, mainly focusing on face monitoring and blink detection to calculate eye activation [2], while the vehicular experiments serve for indirect fatigue recognition through its impact on driving issues (speed maintenance, steering control). The impact of fatigue on the driver's performance should not be estimated using only driving measures, but additional parameters, associated with the driving performance, are needed (such as perceptual, motor, and cognitive skills)
http://www.ltlboards.com/truckingboards/con-way-freight/79255-conway-mobility.html
Posted by Conway/XPO Employees at 4:14 AM No comments: