It won't be politicians bringing jobs back from overseas. It's  working people organizing unions at our workplace and fighting back against the corporate greed that sends decent, good paying jobs overseas. Just to get their millions in bonuses and golden parachutes when they retire or when they bankrupt a company. Unless we organize, corporate crooks will continue to get away with the looting of America. They have bought politicians to weaken or pass laws that will allow them to go around labor laws. They hire labor consultants, better known as union busters, to lie or misinform employees about unions. Their main goal is to divide us while making us believe we don't need union representaion. They tell you to pull yourself up by your bootstraps. They've been successful for almost 40 years by using the divide and conquer mentality. It's our time to stand together and fight back. This is a good example of how unions fight and stand up for working class America.


MOU Cases 06-15-C16; 06-15-W5; 06-15-W9. These cases involve YRC’s office clerical operations and a challenge raised by various Locals to the offshoring of certain billing work to India and the Philippines. According to the Company, Teamster represented employees have historically performed less than 50% of the work in question. Several years ago, the Company closed all of its non-union clerical operations in the U.S. Much of that non-union work was sent overseas. The Company claims that it is not in violation of the MOU because the Union today represents a much higher percentage of the work in question than it ever had previously. Nevertheless, as a result of discussions resulting from the deadlocked case, the Company is now increasing the number of red-circle office positions in Local 63 and the employees will have access to the national queue of work. Additionally, the Company will transfer work from India and the Philippines in order to provide sufficient and appropriate work opportunities. Furthermore, the Company will meet with Locals 20 and 696 about increasing the number of full-time office positions in those Locals. The MOU Subcommittee, has therefore undeadlocked the case and re-assumed jurisdiction for further review and consideration as appropriate.

Posted by Conway/XPO Employees at 1:48 AM 22 comments:

Another Union Victory at XPO Logistics near Philadelphia

Drivers at XPO Logistics in suburban Philadelphia voted for Teamster representation today, propelling a nationwide campaign where XPO workers are standing together and forming their union to win fairness and respect on the job. The vote was 37 to 13.
The 52 drivers at the former Con-way Freight join workers in Miami; Laredo, Texas; Vernon, Calif.; Aurora, Ill.; and in North Haven, Conn. who have already voted for Teamster representation.
"Three victories at XPO in less than a month (Aurora, North Haven and King of Prussia) show that the workers are building momentum in their quest for fairness, strength and a real voice at one of the world's largest transportation companies," said Tyson Johnson, Director of the Teamsters Freight Division. "We will continue to stand with XPO workers across the country who demand positive change."
"Despite the company sending in its high-priced union busters, the workers stood strong, boldly and united in their fight for a better future," said Michael Bonaduce, President of Teamsters Local 384 in Norristown, Pa. "Now, the fight for a strong contract begins."
"This is a great day for us and we urge our co-workers across the country to stand bravely to win dignity, respect and fairness by banding together," said Bill Strouse, a road driver and 23-year employee. "We need to have a voice on the job so that management will listen to our concerns."Click to read more
Posted by Conway/XPO Employees at 6:45 PM 111 comments: 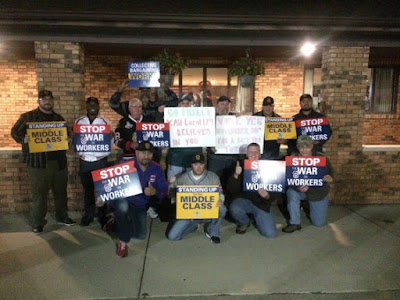 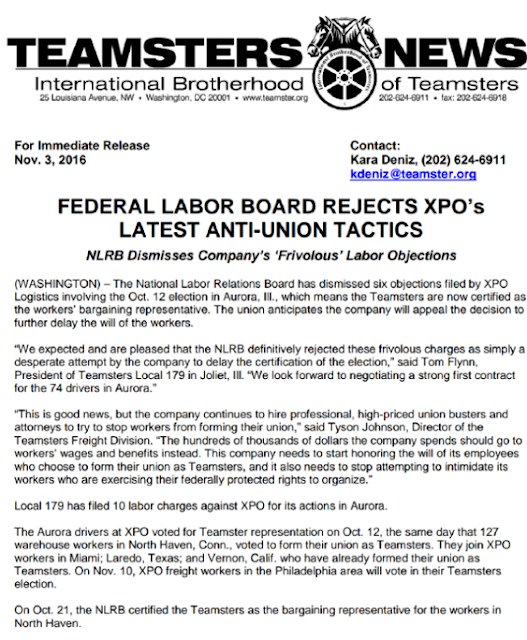 Posted by Conway/XPO Employees at 4:14 AM 23 comments: