This is how they flag an employee at FedEx; it's an entrapment system to weed out seniority and the trouble makers (pro-union)

When you go into this site, click on every point and educate yourself, and see if it is familiar to our system.

What Will you rather have a pension or Bar-B-Q?

Conway likes to sucker their employees in with BBQ's. They would rather spend chump change and buy some food to keep the workers happy. Too many of the guys fall for it and go eat. Why not, instead of free food, have a pension? A pension is like having the wages of a minimum wage job going into a savings account. For every hour you work you get that dollar amount put into your pension fund. So what sounds better? Free tacos or getting $9 extra an hour being put away for your future? Send Conway a message and stop eating their food!
Posted by Conway/XPO Employees at 9:22 PM 7 comments:

A message from changefedextowin, we are fedup with Fedex

John Johnson will be greatly missed

John Johnson A Conway driver was killed last Wed. in NC. 64-year-old Johnson was pinned between a tractor trailer and the loading dock at Cherry Farms Seed Company, on Highway 94 south of Columbia. our sincere condolences go out to his family .he will be missed.by a lot of people. our heart and prayers go out to the family.
Posted by Conway/XPO Employees at 1:49 PM 4 comments: 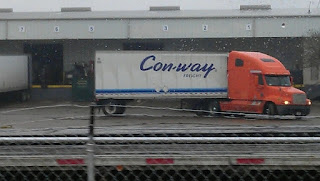 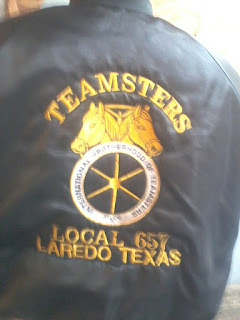 A Little History To Teach Us To Fight For Our Rights...

FIRST CONTRACT ARRIVES ON TIME FOR WORKERS AT RAILCREW XPRESS


Negotiations for the three-year agreement took more than a year as the union negotiating committee and management clashed over wage increases. Despite enlisting the help of a mediator, the two sides were unable to reach a compromise on wages. However, the union was able to secure the right to reopen negotiations for wages after one year.
“While we were not able to settle on wage increases, this first contract makes many crucial gains in workplace rules including a strong grievance procedure,” said Gary Ketchum, President of Teamsters Local 523. “The additional gains that we negotiated that impact compensation could increase the average workers’ wages by 9-10 percent over the course of a year.”
Prior to this contract, the RailCrew Xpress workers were only paid when transporting rail crews to their job. Under the new rules, the 18 Teamsters are paid whenever they are performing duties associated with a job, whether its fueling or maintaining their vehicle before or after the transport or during any downtime waiting to pick up rail crews for transport.
“Our members are pleased with this first contract,” Ketchum said. “It was through our negotiating committee’s hard work and unwavering faith that we were able to bring a strong first contract to these workers. Committee members like Gaylord Ferrell were invaluable assets during these long negotiations. I look forward to reopening this contract in a year to negotiate the type of wage increase our members deserve.”
Posted by Conway/XPO Employees at 6:53 PM 1 comment:

Here are some of the Absurd write-ups management at Conway likes to give out:   driving a forklift to fast on the dock even though they train you to SAFELY work as fast as you can, walking out of the crosswalks, getting something in the eye while driving, no 4 ways while driving in the yard, no seatbelt, no three point exit out of a tractor. A dispatcher can waste diesel fuel sending you a place only to meet another Conway driver who is making your pickup and then turn around and have the guts to write you up for an absurd, petty piece of crap like this. What is going on in this place? What is going on is that we have no way to fight back without having a union, no way to tell them to go to hell and leave us alone. With a union contract in place all those ticky tack write-ups wouldn’t be valid. They would get laughed at by shop stewards and business agents. It’s up to us to get together and try to get the union in here and stick it to Conway.
Posted by Conway/XPO Employees at 10:24 AM 2 comments: