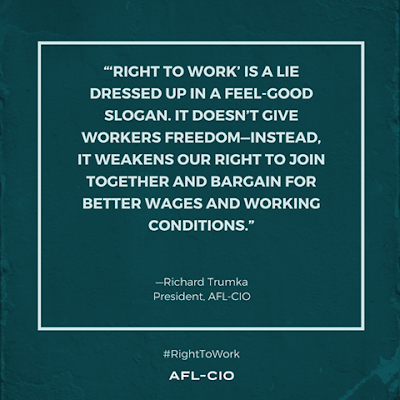 Working Americans stood up to the political establishment in 2016 and demanded that the resources of the country and efforts of the government be devoted to restoring the manufacturing base that provided generations of Americans with good paying jobs that propelled them into the middle class.They wanted those jobs brought back from foreign countries and they wanted to stop today’s employers from continuing to close American factories, moving them to countries where they could find employees who would work for less and demand fewer benefits. Behind the narrative is the fact that most of the good paying jobs that corporations made disappear were union jobs, covered by union contracts guaranteeing middle class wages and middle class safety, medical and pension benefits.But as a new Congress took its place on Capitol Hill this year, it became quickly apparent that those in charge are listening to the big business interests that bankrolled their election campaigns, including many of the businesses that closed their factories in the United States and left for foreign shores. Nowhere is that clearer than the Republican’s roll out of so-called right-to-work (RTW) legislation that would further decimate good wages nationwide.
Under current law, each state has the right to decide whether to adopt right-to-work laws for private sector employees in industries other than rail and airlines. Now the oft-proclaimed proponents of limited federal authority want to take that right away from the states and authorize the federal government to impose a law that will eliminate the right of workers to participate in democratic organization that provide them a say in their workplaces. Can anyone spell hypocrisy?The destructive anti-worker bill introduced by Reps. Joe Wilson (R-S.C.) and Steve King (R-Iowa) last week would amend the National Labor Relations Act and Railway Labor Act, to prohibit workers and their elected bargaining representatives from negotiating contracts to protect and improve their wages and conditions of employment and spread the cost of that representation among all of the workers that reap the benefits.
It is safe to say that no worker who participated in the recent election, regardless of which candidate they supported, voted for RTW as the means of restoring America’s economic strength. Rather, the new legislation is being pushed by the American Legislative Exchange Council and billionaire industrialists the Koch brothers, people and institutions not known for their concern for the welfare of America’s workers.
There are no verifiable economic benefits from RTW, other than for the corporations. Studies in states that have adopted such measures in recent years belie the claim that industries will relocate and create a vast number of new jobs. Seven of the 10 states with the highest unemployment levels currently have RTW on the books. Even Stanley Greer, a spokesman for the anti-labor National Right to Work Committee, said, “We’re not purporting to prove that right-to-work produces superior economic performance.”
What is true is that once RTW laws are enacted, lower wages and fewer rights on the job are sure to follow. As the Economic Policy Institute noted, wages are 3.1 percent lower in RTW states for both union and non-union workers, even after calculating differences in cost of living, demographics and the local labor market. That would become the reality nationwide as workers would now have less bargaining power.
Why do corporations want RTW? Because union jobs pay more. In fact, the Bureau of Labor Statistics found that the median union worker makes more than $200 a week more than the median non-union employee.
RTW is a ruse. Workers in all industries who don’t want to become a member of the union already have the right not to join. It’s the law of the land, as it has been since 1947 when the Taft-Hartley Act was enacted. After workers vote democratically for union representation at their workplace, unions have a legal duty to represent all the workers, even the employees who choose NOT to join the union. But because unions are required to represent even non-members under the same laws, non-members must pay a fair share to cover the reasonable costs of bargaining and enforcing a workplace contract, an amount that is a fraction of the rate of dues paid by workers who want to be members of the union.
Ending that requirement, as RTW would do, would significant diminish the union’s resources available to deal with corporate power, and as Republicans are especially aware, power requires economic resources. The very purpose of RTW legislation is to enable the minority of workers who did not vote for the union to ride for free on the backs of their fellow workers. It is like permitting citizens who voted for Hilary Clinton to stop paying federal taxes because their candidate lost the election — yet they still use all of the essential services and benefits of the federal government. Every freeloader that takes advantage of the higher wages, better benefits and safer working conditions that unions provide while not paying any portion of the costs diminishes the union’s ability to service all of the workers it represents. Imagine the impact on the quality of public education if Congress passed a federal law requiring a school board to provide education for every child but giving parents the option not to pay any portion of the cost.This legislation does nothing to create jobs, grow the middle class or improve the lives of workers. It’s shameful that some members of Congress have chosen to prioritize big business interests over the demands of their constituents. The Teamsters Union is committed to improving the lives of working people by fighting against dangerous RTW.
Follow James P. Hoffa on Twitter: www.twitter.com/Teamsters 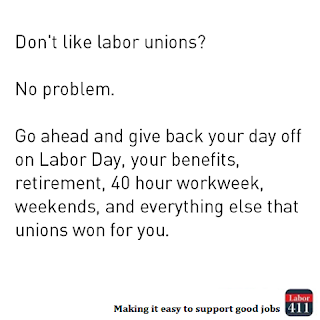 Posted by Conway/XPO Employees at 11:44 AM

That's why we need the union

How long will it take for a union to be established and the rules to be followed. I have a feeling they would still manipulate the rules if a union were ever established at my facility

Anonymous said...
How long will it take for a union to be established and the rules to be followed.

It will depend on how long the company fights against certification of the unit until it finally sits down to bargain. Bargaining could be more then a year for the first contract. Miami will be able to give a better time frame on the contract process at XPO. Of course the company will still break the rules but there will be consequences if or when they do. The point is right now you do not have anything to back you up.

Ask a UPS driver about the rules being broken. Sure you might get suspended for a few days without pay but the union will point out the company was wrong in doing so. In most cases you will return to your position with back pay. Note that the union can not protect you if you break the cardinal sins but as long as you are doing your job you will have their legal team working for you. That is where the dues really pay off, you are getting access to a legal team to work for you after the contract.

People we have to stand up to the rich let's put our differences asides and come together as drivers. Regardless of our race white,black, mexican,we we don't have to love each other but I know we all want the same thing,respect better pay and benefits. The union can give us these protection.

Right-to-work” laws do not give anyone the right to work. The name is an intentional misnomer. It seeks to silence the voices of workers who stand together through their unions. It targets workers’ ability to negotiate together for better wages and benefits and safer working conditions.