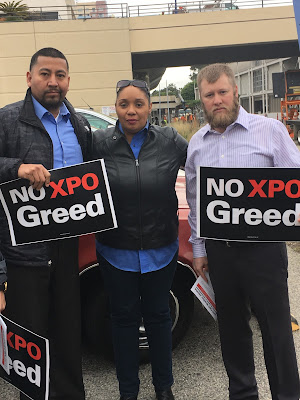 Posted by Conway/XPO Employees at 12:39 PM

What a great job this worker's did in standing united and speaaking out. G[d to see that not everyone at XPO is a spineless jellyfish..
Great Work!!! Unity sure does bring power.

An XPO Freight driver named Richie Buitrago (a former union supporter) from the Orlando, FL terminal was fired for stealing time and brought back after two weeks by management cut a deal with the company or management to save his own ass to betrayal his co-workers in Orlando, Richie is working on behalf of the company along side the Union buster's conducting anti union meetings just like the guy out of Laredo, TX who also betrayed his co-workers in Laredo he was also accused of stealing and is currently under investigation by XPO Security, Dsr named Javier Moreno. They will keep Javier's case open and pending as long as these DSR'S are useful to them as anti union spokemen. They have been doing anti union meetings with the union busters in Elgin and Aurora, Illinois look out for these 2 DSR'S in your location.

Every Bad Sheep or in this case Bad Dog has its Day!they will get thier Medicine when the time comes believe me everyone does.

People better start realizing that the higher up's don't give a shit about us worker's. Management is all about greed..

Sorry posted the wrong story. Here's the story on how XPO is cutting worker's.

In Orlando it's getting worse the rats are running the show!You can steal all the time you want as long as it's on the road.They worry about 5 minutes of duell time and call you out on it butt you can stay out on the road for 14 hours. Favoritism running rampant rat out your coworkers and you can do what ever u want? Management turns a blind eye to drivers that take 3 hours to get back to the service center when there 30 minutes away and that's every day right Ron!!! That's y we need to petition again and soon before things get worse! For a company that's so afraid of the unions they love to piss people off. They say we're slow but some drivers doing 70 hours every week. Orlando's full of fucking Rat's.

Our laws and protections are braking down people in power feel they can do what ever they want,look at the president and his administration they are all corrupt! And when corporations see that they leaders of this country are cheating lying and stealing well they will do the same. Remember it's big rich corrupt corporations like conway that put these people in power so they can do what they want to working people like us. You people think that he's going to make America great again... what a joke


Republicans Just Made It Easier For Companies To Exploit Workers
http://m.huffpost.com/us/entry/us_58bdb96de4b0d8c45f4565f8?section=politics&

Union busters Lying pieces of dog feces....they're a fucking nobody. Get a fucking job you worthless a-holes.

Union busters are nothing but bullies. We kicked their asses at ulx and kicked them harder again in front of a labor judge....you know who we are, you whine little bicthes.

To fake faker ass Richie: Judas betrayed Jesus for 30 pcs of silver. What your price?

Spam spam spam still have a lot off space

Stay tuned Orlando will be organising some meetings soon! Favoritism is rampant and management's the culprit! Now I understand why the petition was pulled Richie probably flipped be for we got to vote? Now we know what side he's on your next union busting meeting going to be in your home town. Can't wait to see Richie bad mouth the union in front of all his peers.

Busters get ready Orlando's going to be petitioning soon!

Richie is probably a "trumpanzee" defined by
Urban Dictionary as,
"A Trumpanzee is a mindless follower and believer of Donald Trump. Observe these primitive creatures from a safe distance, as they are known to attack. Trumpanzee's are un-evolved members of society known for nonsensical, sexist, racist, and inflammatory remarks. Their low intelligence makes them impervious to facts, and they seem to have an affinity to HUGE walls. - -Do not engage - -"

Well said and their orange leader is dumber then his followers, go figure that out.

This MF say it's slow and force drivers to stay home ,and the only ones to blame is them selves for racing the price Again and customers are fed up with it and rather ship with some one else, they are cool with their salary income but the drivers have to work to make their pay. And one more thing how about their big bonus checks but the drivers always get the end of the cows tail miserable check ,keep your check need more work so don't be afraid UNITE

In Orlando they're letting the Rats out of their cages! Looking for info even service center manager came in early and walking the floor with his fake smile pretending to care about us This guy never leaves his office glued to his laptop. While certain drivers Rob the company blind! Xpo needs to clean house all this old conjob management. And all you fucking Rat's you can sniff all you want we know who u are looking for information on meetings.

San Fernando Terminal Manager, Todd Williams and San Fernando Regional Manager, Jim Lutz are lying by telling drivers and dock workers that downtown L.A. (ULX) didn't get a raise. If anyone is willing to testify, who was in attendance of any meetings where Todd and Lutz blatantly lied, we can file charges against them. There is another liar amongst us Ventura (UVC) Manager, David badon is misinforming employees that Miami terminal has closed for voting in favor of union representation. These are labor violations.

I agree 100% on this shit,where do I sign for union fuck this people am tired of it.
And for those that are afraid fuck them too.

Let noone Bullshit you Miami is doing better than ever, here in NMF/ MIA Management and Supervisors do whatever they want and yet they bitch about having the Union in Miami-NMF bunch of Fucken Hippocratics they never had it better and they never will when Nicole Wood was running this terminal in Miami she kept a tight ass leash on everyone now they're doing whatever the fuck they want to do they come in when they want to come in and they leave whenever they want to leave especially our terminal manager you never see him unless there's an actual problem like he gives a fuck and our operations manager the only thing he lives for is to try to catch somebody in both their asses, also just like the ex inbound supervisor they should have fired him a long time ago for all the Discriminational allegations he's got on top of him, but my friends every fucking dog has its day.
Peace out Miami Teamsters

Richie is a pussy he will get what's coming to him that fucking rat sooner or later Rats pay thier price.

Please forward and share with all immediately! It's time to stand up and rally around our co-worker Tommy Bower.

Attention Trenton and all of XPO Driver's,

In case you didn't know last night the union buster got very aggressive in the meeting, threw his paperwork and books, jumped around the table and got directly into Stan's face. The union buster was inches from Stan's face violating his personal space and proceeded to verbally attack Stan. He did this with Tommy last week and this time when Tommy came out of the meeting he felt sick, he was taken to the hospital and they told him he had suffered a heart attack. This goes to show how desperate the company is trying to keep us from having a voice and voting YES on April 14. Please keep Tommy in your prayers and when we get the room # and visiting hours I will let everyone know.

Bruce Ryan
PS: Ourprayers go out to Stan and his family to that everything will be fine. Amen.

Sorry our Prayers go out to Tommy and his family, Misunderstanding.

Richie is a fat pussy. You think you going to get away with what you just pulled today. Yeah we know what you tried today rat.

We will be bringing you and update on to the great times and the fun times and what a great place to work in the Miami Terminal is, this terminal practically runs by itself we don't need an operations manager we don't need a terminal manager because thier never around when you need them they're only around when they want to tell you something or to try to bust your ass in something, of course they always blame the drivers but they're inside employees are the ones that are stealing time every day
left and right, right in front of the noses of course they'll tell you they don't know nothing about it and then when you tell them something about it they don't do a fucken thing that's exactly why we need the Union everywhere! So once again I tell you why would you bitch for having the union beingin a terminal when management does whatever the fuck they want to do, so the supervisors you complain to them about a problem and say yeah don't worry about I will take care of it but then in the end we all know that they don't do a fucking thing about it either of course the ones that are causing the problems and conflicts and doing whatever the fuck they want to do and stealing companytime is their own people because they don't want that Union so you know what I tell them, fuck them. Union all the way Miami Teamsters.

Ladies and Gentleman "WHAT ARE YOU WAITING FOR? Just heard from a Very good source can't say or they will get Fired! XPO LOGISTICS WILL BE SOLD WITHIN THE NEXT 3YRS YES U HEARD IT WITHIN THE NEXT 3YRS. if you're around to see it Happen or hear about it.