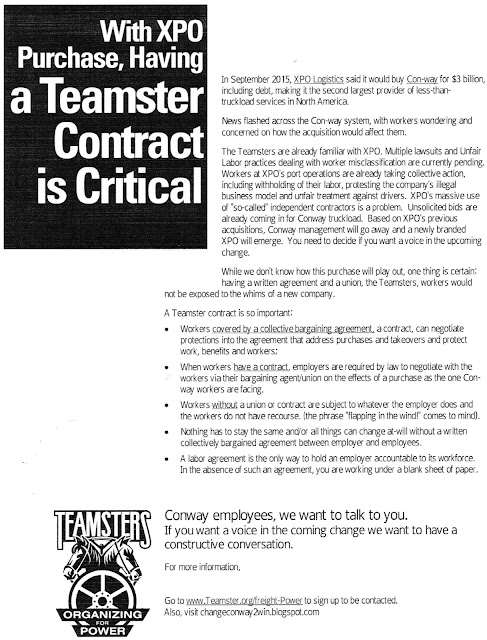 Posted by Conway/XPO Employees at 5:08 PM

This is the way to go, let's get a Contract like the big EXCUITIVES have one, I be you that they have THIER Asses covered of course they do, there not Stupid or IGNORENT like we are we will just let it all work out for us won't we people wake up and smell the Union. 769 Miami.

This is the way to go, let's get a Contract like the big EXCUITIVES have one, I be you that they have THIER Asses covered of course they do, there not Stupid or IGNORENT like we are we will just let it all work out for us won't we people wake up and smell the Union. 769 Miami.

OK can anyone say that xpo is moving freight thru conway , further more for xpo to make the profit they want in the next 2 years there is one way and one way only, that's to cut wages,benefits and yes line haul, oh and Im guessing a layoff , after line haul is cut to nothing that's a lot of driver's not needed, if I missed anything let me know, anyway there's the profit xpo is looking for, If anyone says they need our line haul guess again , xpo has thousands of contacts for trucks. All they need is P@D for now.

Union now or eventually some will need a bankruptcy lawyer your choice.

First thing they will get rid of is day Linehaul, you talk to those guys about the union and there like no way everything will be ok it's just a buyout they say nothing is going to change,watch what happens when they take day Linehaul away.

Question, what local is Miami and Laredo?

Xpo is going to close all the leased SIC's over crowd the other's and the FAC's. Force pay cuts to dock workers and drivers. Xpo drivers are paid $18 hell that's what a dock guy makes now with conway and if you think xpo is going to pay a dock worker the same as their drivers YOU'RE A DAMN FOOL! Then they'll cut drivers pay then slowly start replacing line haul with owner operators. Sell off the reminding SIC's that they actually own and just have FAC's up and running 24/7. If you want a good idea of what XPO is going to do just look at The Customs Company in NorthLake Il. Cheap prices for freight, they'll do LTL,rail,air and ocean, a bunch if owner operator's, pay their house drivers crap and pay their dock workers even less with more hours worked. It's too late for a union sorry too say. If any union cards were signed before the buy and those cards say CONWAY their USELESS new cards would need to be signed with XPO as the employer. But if you couldn't get union cards signed before at your barn because everyone was drinking the kool aid, I doubt you'll be able to now either because everyone has that "lets see what happens" attitude. Either way we're all screwed so dust off the resume and happy hunting because I'm not waiting around till the unemployment line is full I'm bailing ship ASAP

Did I read a comment right? 250 jobs have already been cut from Conway?and we haven't even gotten our XPO shirt's and hats yet?If this is true can we expect more cut's?...HMMM let's think about this??? Profits??? Or people???which is more important to XPO? Anyone??? Maybe we should call the workers for Norbert or Express 1.Maybe they can shed some light for us?

I'm glad all you optimists are on here sharing your inside information,what you all say may very well be true,,,,or maybe not. In all,only Brad Jacobs knows what he's gonna do,this might suck or it might be the best thing to happen to us,no sense speculating about it,either we mobilize now or wait it out,if we mobilize it cant be like that pussy ass effort that a few people put on last year,it has to be swift and widespread,i suspect it will be closer to last years effort.