Huge Teamster victory at the Port of LA/Long Beach! 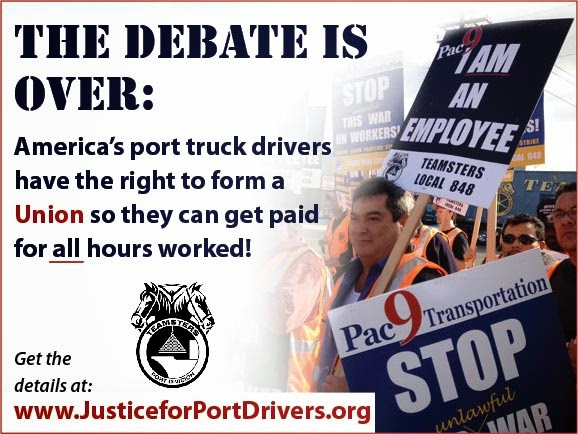 Pacific 9 Transportation (Pac 9) agreed today that its port truck drivers are employees and have the right to join a union, according to a settlement reached with the Teamsters today. The settlement is part of a series of state and federal actions that strengthened the hand of truck drivers who want union representation at the Port of LA/Long Beach, according to the Los Angeles Times.

The settlement follows a finding by the National Labor Relations Board that Pac 9 drivers have been misclassified as “independent contractors” under the National Labor Relations Act (NLRA). Further, the NLRB’s Region 21 found that drivers have been subjected to unlawful retaliation for exercising their legal rights to organize a union. (Read the settlement here.)

According to the Los Angles Times,

The agreement comes after repeated victories at the state Labor Commissioner’s office, where 30 drivers have won decisions against 11 port trucking firms, awarding them $3.6 million in wages and penalties.

I am ecstatic. They dug into this situation and found there is a serious problem here. We are trying to protect jobs and workers who are being mistreated.

The ruling from the NLRB regional office could affect the entire port trucking industry, which currently leaves many of America’s port drivers working full time yet earning less than minimum wage.

According to HDT Trucking Info,

...the settlement does not include Pacific 9 Transportation admitting to any wrongdoing.

Pacific 9 drivers have filed more than 50 wage and hour claims with the California Labor Commissioner and went on strike in November 2013 in protest of unfair labor practices. They were joined in a 36-hour protest by drivers of Green Fleet Systems and American Logistics International, also located in Carson, just north of Long Beach.

Pac 9’s business practices have also attracted the attention of the Tax Division of the California Employment Development Department for misclassifying drivers and failing to pay unemployment and workers compensation taxes, according to the group.

Now that the government has validated what I’ve always known – that I am misclassified as an independent contractor – I have the rights of an employee and can fight for better conditions at work and a better future for my family through a Teamster contract.

Pac 9 owns the trucks driven by the drivers, but forces them to pay for fuel, tires and maintenance. Because the company misclassified them as independent contractors, they didn't receive benefits or enjoy legal protections as employees.

Posted by Conway/XPO Employees at 3:43 PM