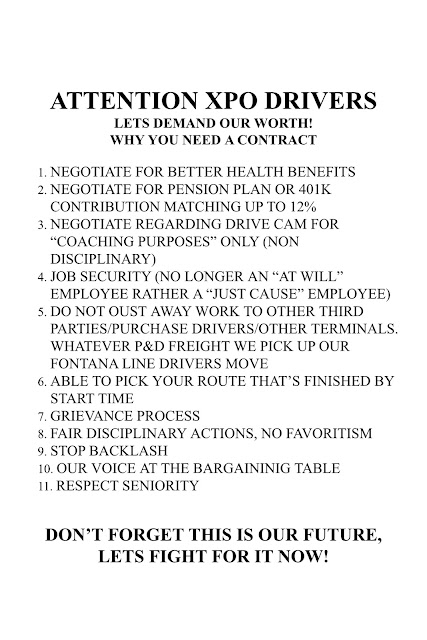 Posted by Conway/XPO Employees at 4:45 PM

You post things that intelligent people can and have figured out. Your posting to XPO drivers, the dumbest sob's on the face of the Earth. Look in the mirror, walk out onto the dock, your one step above a plant. You think your sheep hearders, your just sheep. Wake up dummies before you get stepped on again.

All talk no action still waiting to sign cards . As time goes by I'm just giving up on the Teamsters. I hope by the beginning of the year I hear some good news

Sounds good on paper but can it be done??

It’s up to you and the rest of us working at xpo to band together and show corporate leaders we got the cojones to stand up and vote yes for Union representation to negotiate for better retirement and medical benefits.it’s us no one else, we need to educate the rest of our coworkers to make them understand without union we have no future at xpo.

Teamsters negotiate for the pension first that what we all want. We are here for the long term I least I am , I know what I want. I want my pension back

Serious question here, have any of the current svc that voted to be represented enacted a working contract? I'm at a location looking right now and that is one of my concerns. In other words, after a yes vote to go for representation, how soon after does the union and xpo management sit and start hammering out a contract? How long has xpo dragged it out on average? Thanks.

Favoritism at it finest at usb new years eve can't wait until the beginning of the year where the union when you need them . ????

Call union organizer ray at 909 419 0799 or talk to one of the committee organizers at usb they will answer your questions.

So what's new at usb and the union anything new ? Anything change ?

I don't understand , how is it that usb tells us that favoritism doesn't exist at USB
Supervisor don't have their favorites. we all saw it new year's eve one little stap comes in early , then at the end , you see all the little staps going home while big strapper still working why is that ? Supervisor don't care about seniority or is favoritism I don't understand supervisor should of started to bring in driver's by seniority let's bring in the union now this needs to stop. 20 year's in the company and I'm the little fish still , I'm signing the union card when the time comes union all the way for me now

Ubf what's happening with you guys??

Ubf has anything change after voting yes , USB wants to know is it worth it ??.

This is NOT a overnight thing. it take time &
one step at a time.

Yes it is worth it. If you guys think is not well dont even try. Just think for a second why is XPO paying so much money on UNION busters?

Why is Juan Melero,Wendy Mairena and SCM kissing everyone’s ass?

Is time for a change GO Teamsters 💪🏼💯 UBF

Xpo at usb just loss a great man , (Lee), xpo just doesn't care and didn't appreciate him at all he work his a** off for this company I hope for something better and less stressful and more more money you deserve it.

What is going on with ulx or ula
With the union anybody knows was it worth it ?? USB wants to know

Yes, its worth it. The union will keep your employer in line, and prevent them from exploiting you. Most non-union employers play favorites, and the promotion does not always go to the most qualified employee or the one with the most seniority. It goes to the one that sucks up the most. 99% of all employers are crooked, and are willing to do whatever it takes to secure their bonuses, even if it's unethical, immoral, or illegal. The union will ensure that your employer operates within the law.

"You are pretty dumb Aren't you" Was Rome built in a day?

What happened? Did they drive the guy out?

For those of you asking "Where are the Teamsters" . please understand that there is a process. Resources are limited and if you want Teamster attention, there is some ground work you need to do to help the process along. First, get and organizing committee going. All you need are 2 or 3 guys committed to organizing the terminal. Then, find out how many others are in COMPLETE agreement with you. When you have 50% of your terminal in agreement, then you should contact your local. Your task has just begun. Your local's business agent will then help you along to the 75% to 85% you need to call for a vote. Get on XPO Exposed or XPO Uncensored where there are many Teamsters reps who will answer your questions and help you along.