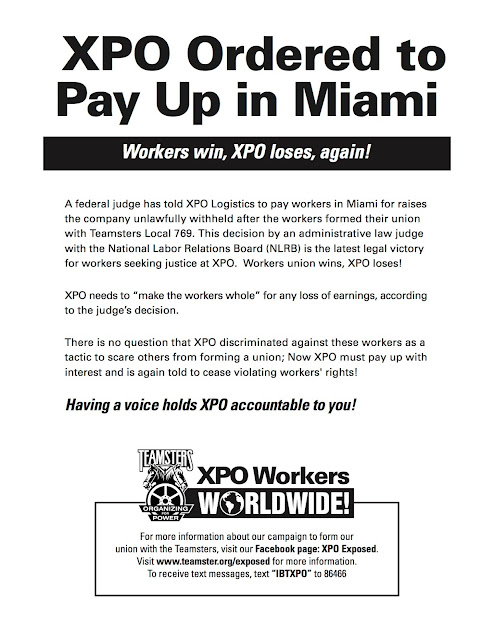 Posted by Conway/XPO Employees at 8:06 PM

does the official notice from the NLRB have to be posted at all terminals or just in Miami?

Keep voting Republican Oh, wait! It's republicans who are doing this! Well, vote against yourselves folks!

Thank you thank you very much.

Yeah baby!I got those horses ready to kick you in the ass. Don't be scared I'll be knocking on your door soon

7 drivers Quit or fired this year at Ula

Teamsters all the way

Many drivers getting ready to leave Xpn fed up with the Terminal managers harassement,lying about bids and his volunteering for pilot programs.

SO XPO IS APPEALING WE ALL KNEW THIS WOULD HAPPEN EVEN B4 IT WOULD HAPPEN SO F***KEN WHAT? THE ARE JUST BUYING TIME THAT'S ALL THEIR DOING FOLK'S!! SAME THING HAPPENED WITH LAREDO IT'S WHAT THEY DO PEOPLE XPO DOESN'T GIVE A SHIT ABOUT ALL THE PAY BACK$$ THAT MIA IS GETTING ITS PENNY'S TO THEM WHAT HURTS! AND IT F***KEN HURTS IS THEY LOST A BIG ONE LADIES AND GENTLEMEN IT WAS PURELY DISCRIMINATION & RETALIATION OF THE EMPLOYEES IN MIAMI AND IF YOU CAN'T SEE THAT THEN UR JUST AS IGNORANT AS THIS COMPANY IS WITHOUT LIKE CONWAY WITH NO
INTEGRITY!! TOWARDS IT'S OWN EMPLOYEES
PS; DO I NEED TO SAY MORE!

Show me the $$$...XPO Is goin to pay up for all there wrong doing and union busting BS...all employees need to stand up for a better future! Remember the company only cares for itself, NOT YOU! All you want to do is work unharassed, have great benefits, and actually have a voice in your future as you bust your asses. Can’t wait to see the look on XTJ TM Mike Allen’s face when the Trenton three get back what was wrongfully taken from them...time to pay up! Stay strong brothers, the fight for union representation is not over, it has only begun!

ULA can not keep new hired workers so they give them morning-good start times. And they are still leaving. Not to mention all the drivers that quit in 2017. Some had over 10yrs. And many more already looking to jump ship. They wonder why. Well maybe its because everybody in management is new. Nobody knows what the hell they are doing. Including the hr lady and guy. Nobody can answer a question. Which means they dont know. They will go and ask Benny and he will make up a rule on the spot even if its not the right thing to do. And once somebody steps up and speaks up the usuall they back each other up even if they are wrong. Rick who? All the new leadmen and promoted supervisors were friends and hung around in the dock and out of work. Nobody will listen to those guys! Supervisors threatening workers in the parking lot and patrick does absolutely nothing. 0 tolerance on harrasment huh pat? Supervisors asking me what to do in some cases wtf! Im just here to swipe the badge and get paid. And thats till the places i put in applications call then im outs! ✌

ULA is in santa fe springs , ca near los angeles

I'VE GOT 1 SIMPLE QUESTION (WTF)! IS EVERYONE WAITING FOR WHEN THE COMPANY SELLS OR WHEN MIA GETS A CONTRACT? LET ME GUESS WHEN MIA GETS A CONTRACT, MIRACLES ONLY COME FROM GOD! NOT HUMANS THAT ARE COWARDS! OR DON'T HAVE THE BALLS TO STAND FOR WHAT THEY BELIEVE IN, LET ME TELL HOW YOU CONQUER FEAR HAVE SOME BALLS AND MOST OF ALL SOME "FAITH" DO I NEED TO SAY MORE! I REST MY CASE!

I’m not sure I want to come back to Xpn. My stress has come way down. I’m happier in life not working at XPN...