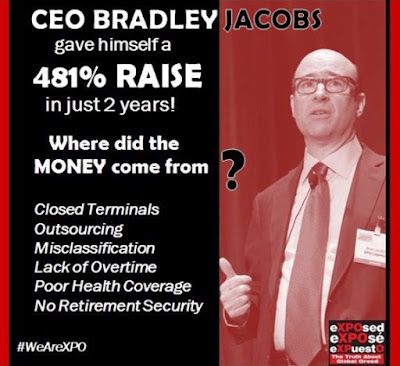 Posted by Conway/XPO Employees at 12:08 PM

Did you really expect anything different out of XPO. Sad thing he aint done cutting yet. What till you see what our insurance is gonna be like next year.

Not just insurance but there will be no pay raise for a year! Plus there cutting some PTO time... Just keep saying no to union

And they think my dwell time is slow now, we can play games too!!!

LMFO LOL THIS IS WHY HE WAS ABLE TO GIVE EVERY TERMINAL A $.50 CENTS RAISE EXCEPT MIAMI BUT THAT'S OK GUY'S WE ALL THANK YOU FOR FIGHTING FOR WHAT YOU BELIEVE IN ,BUT HEY WE HEARD SOME GOOD NEWS IT'S COMING YOUR WAY?$$$
GOD BLESS AMERICA.

That's why we need a contract.Union all the way baby!

Hey why doesn't someone with Balls and Dignity ask Mr Jacobs how does it feel to have a CONTRACT! I bet you he will say PRETTY DAMN GOOD!!!

So why can't his Employee's get a Union contract because then he won't be able to Buy his Million Dollar Yacht, although he still can that won't stop him, but he would have to give up more of his Salarie. Point taking.

That's nothing .From what i was told the big slave driver's walked out the scm from uoa and his second in command is going to usr. That's how XPO want's things done. No guarantees.and driver's at usj are being pushed that there quitting.

Theirs been about 15 drivers that quit milwaukee in the last 6 months, haven't hired any since. They started backup the school and r looking to hire again. Why wouldn't they just hang on to the drivers they had, they know they will be quitting just by talking to them in morning meetings

New labor is cheaper which means more corporate profits if they had there way anybody with more than a couple of years would be gone but fortunately for us there's a shortage of drivers.

UPDATE on local 769 NMF/MIA all is well just to let you all know how great it is to work in Miami the supervisors are happy the terminal manager,operations are happy all the employees are happy we're one big family a full of happiness and love the terminal is basically running by itself, the inbound supervisor spends more time in the office then outside the dock the Terminal manager you never see him and everybody else is just wondering around what a great place to work at and they're bitching that we have Union here and they're complaining that we have Union at Miami, people ladies and gentlemen what more would you want out of life, Just an Update on Mia local 769. THE TRUTH IS THEY NEVER HAD IT OR WILL HAVE IT ANY BETTER! UNTIL XPO COMES MARCHING IN. PEACE OUT.

Why is it that these fools continue to leave drivers at home. These manager's only care about their own pocket when it comes down to. Down in Birmingham Alabama they need the union bad. They have been firing drivers at a high and alarming rate but all have been black drivers. They have a system in play and hr regional manager is a straight up Uncle Tom. Its you guilty till proven innocent with this terminal and company wake up people we need the union to step in now because the slow season has been all year at this terminal. Cutting hours for all the black drivers but white drivers are getting close to 50 hrs. a week. I'm not a racist but this mistreatment has to stop. The terminal manager is barely at work and all he do is lie to drivers and place them out of service for bullshit and then after have a list about what one has been fired for to have the rest of the drivers sign saying you can not do what this other person got fired for and if you don't its a LOI. the rules of this company is horrible and they need a union bad. If anyone knows how to speed up this process please feel free to comment. If any terminal needs the union its the terminal in Birmingham to offset the racist and fake shit those managers give out.