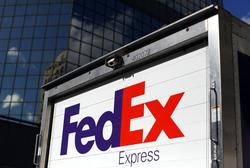 Mon, Nov 10 2014
By Nick Carey
CHICAGO (Reuters) - After years of failed efforts, the Teamsters union has won a toehold in the trucking units of FedEx and Con-way and is targeting more facilities at both, potentially threatening what analysts see as a core competitive advantage for the companies.
The push by the Teamsters comes as a shortage of experienced drivers in the trucking industry is prompting companies to hike pay and offer improved working conditions.
The International Brotherhood Teamsters, which represents 1.4 million workers and is one of North America's most powerful unions, has long tried to unionize workers at FedEx Corp and last month won votes to have union representation at two local FedEx Freight facilities out of three holding secret ballots.
Five ballots are scheduled at FedEx Freight facilities this month, with the next due on Nov. 12 in Newark, New Jersey.
With the exception of its pilots, FedEx's workforce is non-unionized. While pay for its drivers is above that of some competitors, its larger rival United Parcel Service Inc pays its unionized drivers more, and FedEx has higher profit margins.
The Teamsters also won two out of four recent ballots at Con-way Freight, part of Con-way Inc, which according to industry estimates pays slightly more than FedEx but less than UPS.
The Teamsters declined to comment for this article.
The expanding U.S. economy has driven up freight demand at a time when older truckers are retiring and fewer new drivers are signing up. That shortage hurts long-haul truckers more than less-than-truckload operators like FedEx Freight and Con-way Freight, which fill up trucks with smaller orders from multiple customers. But it has forced up pay across the industry.
In April, FedEx announced pay increases for 19,000 FedEx Freight drivers at the unit's 360 facilities, effective October.
"Drivers and dock workers currently have the ball in their court, and it may be there for a long while," Cowen & Co analyst Jason Seidl said in an Oct. 30 client note, adding Con-way's battle against the Teamsters could weigh on its results short term.
FedEx Freight accounted for $5.8 billion of FedEx's $45.6 billion fiscal 2014 revenue, while Con-way Freight contributed $3.5 billion of Con-way's $5.5 billion revenue in 2013.
Both companies are fighting the unionization effort. After the Teamsters scored wins against Con-way, one in September and one in October, the company filed objections to the ballots with the National Labor Relations Board claiming the union intimidated workers, and emphasizes the union's victories affect only two out of around 300 facilities.
"We don't believe we need a third party between ourselves and our employees," Con-way Chief Executive Officer Doug Stotlar told analysts in an Oct. 31 conference call.
FedEx has said it is weighing an appeal with the NLRB against the most recent vote in favor of union representation on Oct. 31 at a facility in New Jersey.
While gains have so far been small - there are only about 150 drivers at the FedEx Freight facilities where the Teamsters won ballots - the union said on its website other campaigns were under way.
"The aim here appears to be to unionize an entire sector," said Dan Cornfield, a Vanderbilt University labor analyst.
But it could be an uphill struggle.
According to data compiled by industry expert SJ Consulting Group Inc, as of July this year Con-way Freight drivers made $24.75 an hour, while FedEx Freight drivers earned $24.40. Among unionized companies, wages at ArcBest Corp were $23.17 and $21.10 at YRC Worldwide Inc.
Unionized truckers at UPS Freight make an estimated $26.65.
SJ Consulting founder Satish Jindel said the Teamsters will likely face difficulty persuading FedEx Freight and Con-way Freight drivers that collective bargaining is a boon when two major unionized carriers pay less.
"FedEx Freight and Con-way are seasoned campaigners, as they have been fighting unionization for decades," he said. "They are not going to be easy targets for the Teamsters."
(Additional reporting by Deepa Seetharaman. Editing by Jo Winterbottom and Douglas Royalty)

Posted by Conway/XPO Employees at 7:34 PM

Doug Stotlar believes we don't need a third party between us and him. He likes holding all the cards, having all the power and control. When Conway does well he buys a new yacht or a private island. But he does spread the wealth with us too. I had pizza three times this year! Pizza is all I need to make me happy, after all I am just a stupid fucking truck driver. Maybe if we do really well Doug could take us all to Chucky Cheese! Come on you stupid fucker I ain't a 5 year old. I am a man and I have a family to provide for. If god forgive I get killed at work, you gonna bring pizza to the funeral? Point is. We are NOT idiots! We know the ONLY reason you promised another raise and changed the safety policy is because of the Union activity going on around the country. We know you have spent millions of company profit on third party union busters. Bet you signed a contract with them didn't you! We have one of these assholes parading around in Orlando. He goes by "Consultant" rather than buster. He is our new best friend. He brings donuts, he urges us to vent out our frustrations about the company, because he will listen and take our concerns straight to Greg and Doug's desk. Yeah fucking right! This guy don't give a Fuck about us! He is getting paid a shitload to persuade us to not vote Union. Send this fucker home Doug! You are wasting our profits.

Guys don't be tricked into voting the wrong way. All of these changes for the better are not being given to us because Conway cares about us. They are happening because we are being bribed to vote against the Union. If we fail, all of these things will be taken back by management eventually, only to get worse as time rolls on. In the last one and a half years, this is the third safety policy we have had. Proof that they change the rules whenever they see fit.

We need a contract! I need job security so I can provide for my wife and kids. I don't want to go to work at any given day, and get fired for running over a sprinkler head.

XNH. We are counting on you. We are supporting you. VOTE YES for our families.

Give me Union or give me death!!

Basic info on Arcbest Corp.....
Arkansas Best Corporation is a $2.3 billion
freight transportation and logistics services
company that creatively solves our customers’
problems, delivering tailored solutions for
a wide range of customers, large and small,
corporate and individual.
From Fortune 100 companies to people.......................

Arcbest is worth how many billions less than Conway and FedEx??

� The change in timing of two events, both previously announced, will impact third quarter sequential comparisons versus similar comparisons for previous years:

� On July 1, 2014, as specified by its current labor contract, ABF Freight implemented a 2% wage increase for all union personnel. In the previous labor contract, running from 2008 through March 2013, wage increases were effective on April 1 and therefore had a neutral impact on sequential, operating ratio comparisons in the third quarter.

� ABF Freight implemented a nominal general rate increase on its LTL base rate tariffs of 5.4% effective March 24, 2014. This applied to approximately 35% of ABF Freight's business. In recent previous years, general rate increases were effective in later periods ranging from late May to late July and therefore had a greater positive effect on sequential operating ratio comparisons in the third quarter.

� On August 1, 2014, as specified by its current labor contract, the union health, welfare and pension benefit rate increased an average of 3.6%. There is no change to the August 1 timing of health, welfare and pension increases from the previous union labor contract. The combined 2014 increase of union wages and fringe benefits is approximately 2.7%. Both of these increases are specified by ABF Freight's current labor contract and apply to approximately 75% of ABF Freight's total employee count.
....But they have a CONTRACT to go by..We at Conway and FedEx all we have is here Say..???My Working Brothers and Sister WE can Make the Change for all of Us.

7. Wage Reduction. The Employer shall reduce by 15% employees’ gross wages or earnings paid per the NMFA, including the increases to wages described above in this Section 6 and the reduced wages in Section 15. Such wage reductions and/or reduced earnings shall include overtime and any premium pay, vacation, sick pay, holiday pay, funeral leave, jury duty, and other paid for time not worked. Wage and mileage rate increases outlined in Article 33 of the NMFA, effective April 1, 2011, April 1, 2012, April 1, 2013, and April 1, 2014 shall also be reduced by 15%. This wage reduction will apply to the NMFA bargaining unit as modified by the General Executive Board of the International Brotherhood of Teamsters on November 24, 2009. The cost of living adjustment provisions of Article 33 of the NMFA shall be suspended for the duration of this Restructuring Plan.

8. Contract Modifications Included in the National Portion of the NMFA. The following modifications to the 2008-13 NMFA and Supplemental Agreements are to be included as part of the first 39 Articles of the NMFA and cover the entire NMFA bargaining unit, as modified by the General Executive Board of the International Brotherhood of Teamsters in its Resolution of November 24, 2009:

(a) Four Hour Guaranteed Local Cartage Employee: The parties recognize the need for the Employers to create job opportunities and efficient operations during this period of financial restructuring and recession. For these reasons, there is established a four hour guarantee local cartage employee classification. This local cartage classification will enhance the Employers’ ability to compete and provide work for the substantial number of laid-off employees. The four hour guaranteed local cartage worker shall have no impact on regular straight time work opportunities of active fulltime employees, unassigned and /or 10%’ers or shapes as defined by the 2008-13 NMFA and Supplemental Agreements..........
YRC doesnt have the Greatest Contract,But the Employees still have a Say on what they what to do for the Company...Conway just does what ever when ever they want and we have no say.If we UNITE we can change that.THE YRC contract is a learning tool for what not todo.