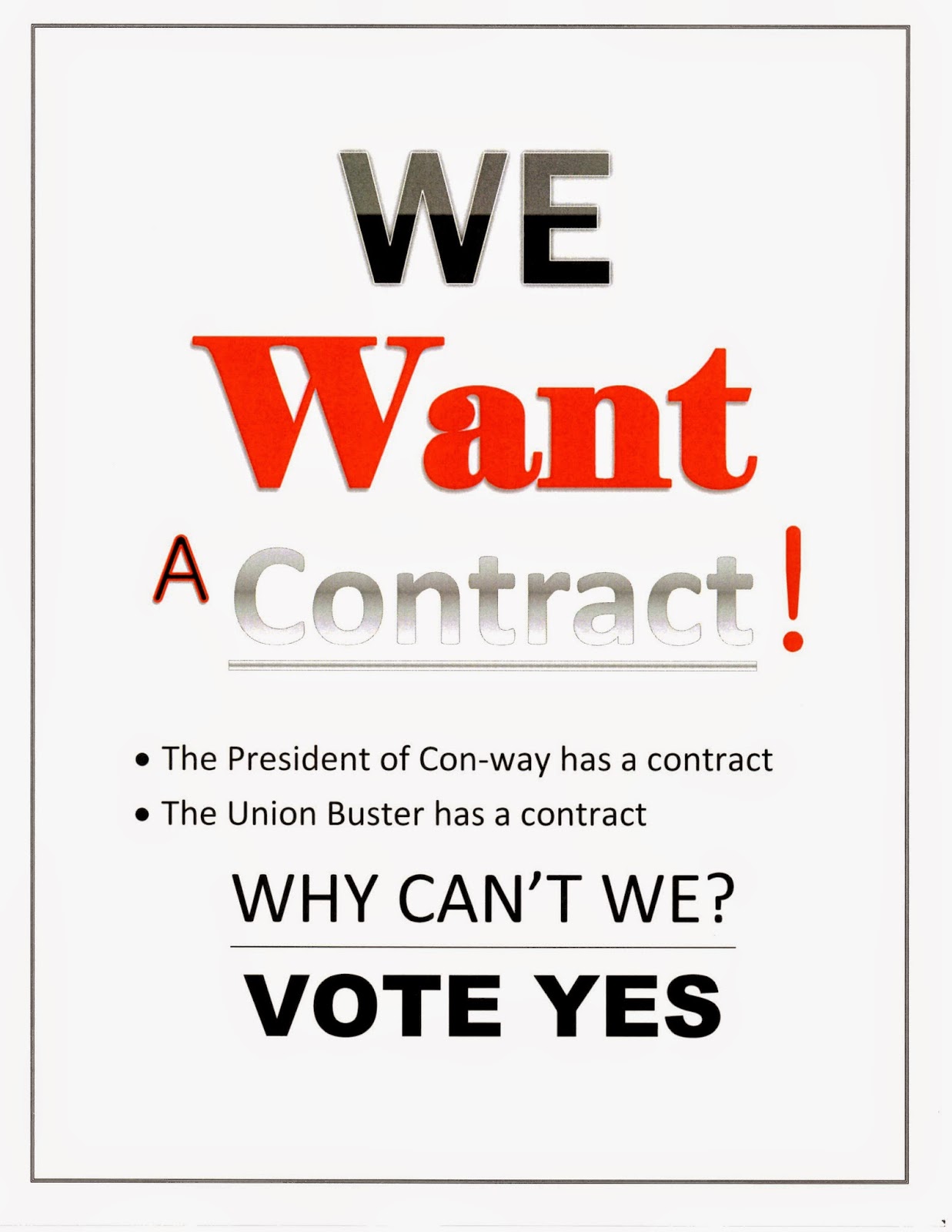 Posted by Conway/XPO Employees at 9:34 PM

I want a medical and pension contract with a side order of length of service respect !

GIVE YOURSELF A CHANCE AT FEAR TREATMENT AND RESPECT VOTE YES!

Can't wait for your announcement NMF!! You guys should trade NICHOLE WOOD for a used outhouse, because the hole would be tighter and it would stink less!

No guarantee with Conway they have a bad record of taking away benefits ,pay vacation ect ect they have no employee hand book changes every day or to suite their needs UNION contract will not be changed this company has to be held to a UNION contract we all know who we work for their word is no good they have had many chances to change they have refused because they don't give a damm the only choice is UNION YES

SoCal were counting on you! u have nothing to lose and everything to GAIN RESPECT VOTE YES.

I want the contract! when are the so call negotiation going to start? Because right now. of all times I feel that my job is in real danger. And nobody is going to defend Me. LLA management is really look in to screwing everybody that voted yes.

COME ON REST OF THE. CONWAY NATION.LETS SUPPORT EACH OTHER LETS MAKE IT HAPPEN...LETS STAND STRONG AS A UNIT AND LETS ALL BECOME BOTHERS AND SISTERS...VOTE YES FOR OUR CONTRACT FOR. BETTER TREATMENT AND A BETTER LIVING.VOTE YES....CONGRATULATIONS MIAMI WAY TO GO..COME ON S.LA TELL CONWAY WE WANT RESPECT.

THATS RIGHT CONWAY HAS NO INTEGRITY OR RESPECT FOR DRIVERS.

Keep strong bro. It's gonna take time, and management is gonna look to take revenge. Be safe. Keep the faith. There's gonna be a firestorm of service centers following what you guys did for the rest of us.

Boom that's gonna leave a mark in Ann Arbor the unemployment office will be pretty busy their soon enough.

"Most of the important things in the world have been accomplished by people who have kept on trying when there seemed to be no hope at all." -Dale Carnegie (2 days till voting for ULA ULX UFV) So. Cal.

Tomorrow is a big day we vote yes in South Cal... The president promised us that we are guaranteed the raise in January no matter what but we all know it is all part of his little scheme.... I guarantee he don't give a shit about any driver in Conway yeah they gave us or they're going to give us a raise and they gonna raise our medical and take more shit from us... Don't fall for their bullshit anymore vote yes unión all the way ...

It is illegal for them to even think about firing anyone for UNION activity. Let them try it

I saw a gas station,while on my peddle run today, that had pricing of it's diesel fuel for $3.39 a gallon .Surely cnw must be making a few more bucks on fuel savings and getting a nice bump in it's profits. I was just wondering, couldn't these and other such profits be used to support a pension fund for us dsr's,( via cnw's own initiative or through a contract)?

Everybody should send this link to 3 people u trust and they should do the same.. let's all help spread the word... And together we can CHANGE CON WAY TO WIN!!! NEVER SETTLE FOR LESS... BROTHER'S AND SISTERS