$3,169,698 is the price that Conway and other corporations are willing to pay to keep us union-free. That’s what they have paid to Lupe Cruz and Associates, a firm of union busters. That’s what Conway has paid so far to keep our wages and benefits down. That’s what they pay to make sure you have no rights at work. They spend that money willfully because that is nothing compared to what they will have to pay us in better wages and benefits should we organize. These people are hired to lie to us, to make us believe that we don’t need a union. They make money on people’s misery. Everything Conway has given to us over the past year is because they are trying to stop the bleeding. The wage increase is to pacify us. That will go away once the union movement dies down. Let’s keep making this company throw money away on union busters. All that money will go to waste and we will still get our union 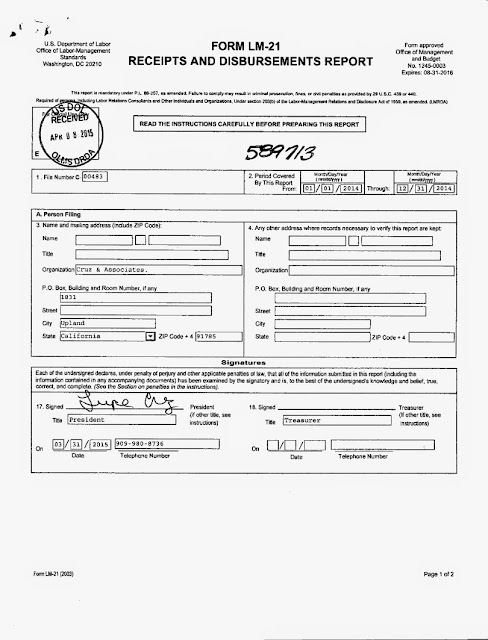 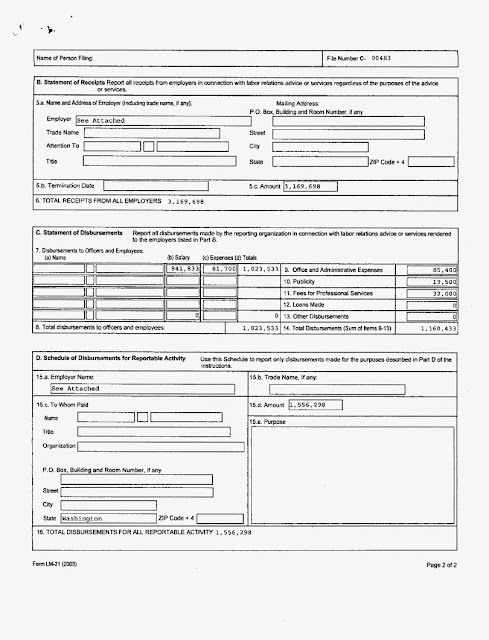 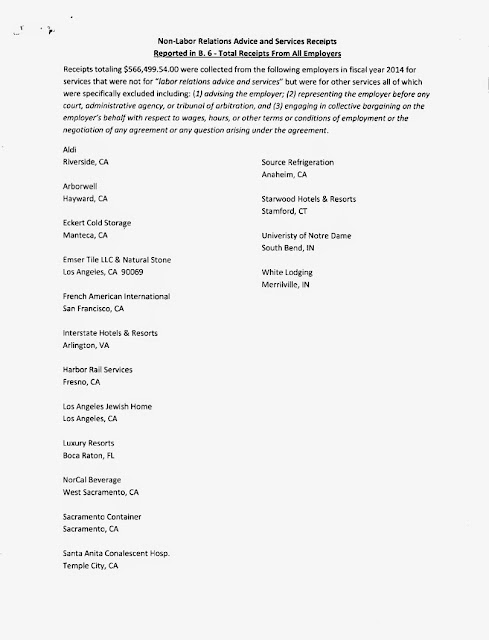 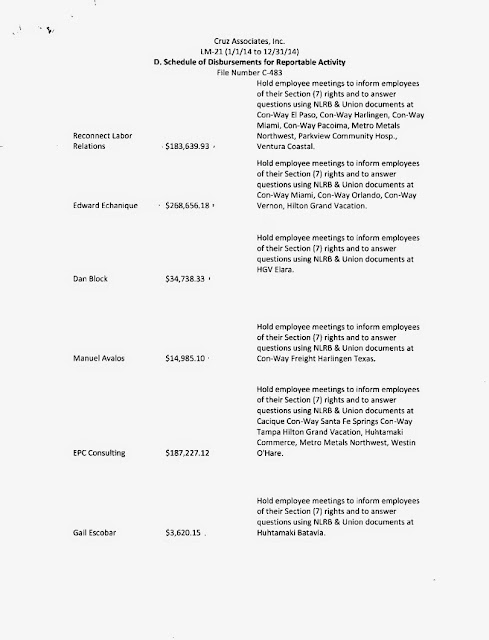 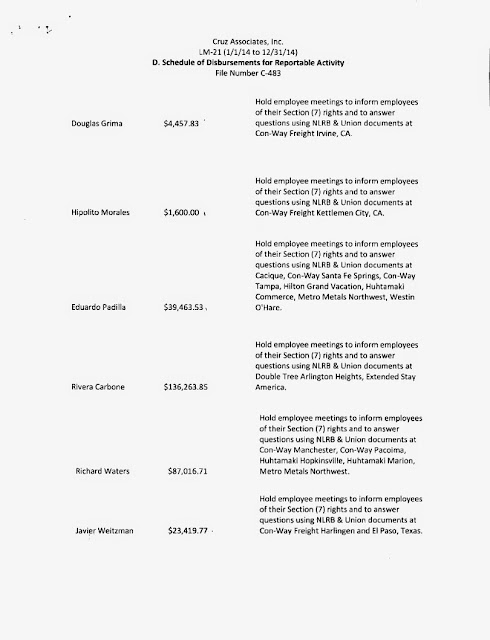 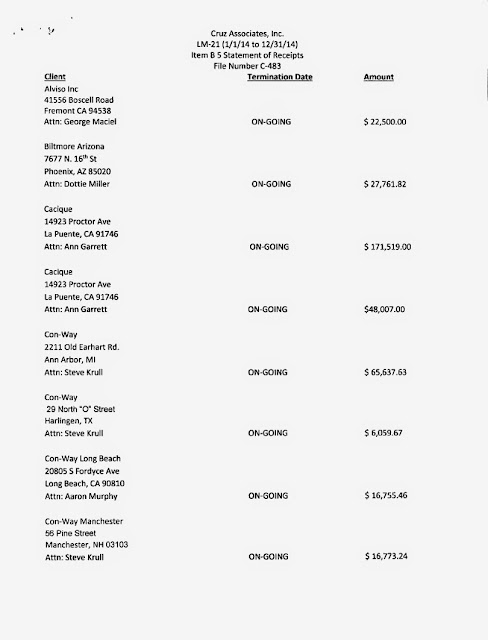 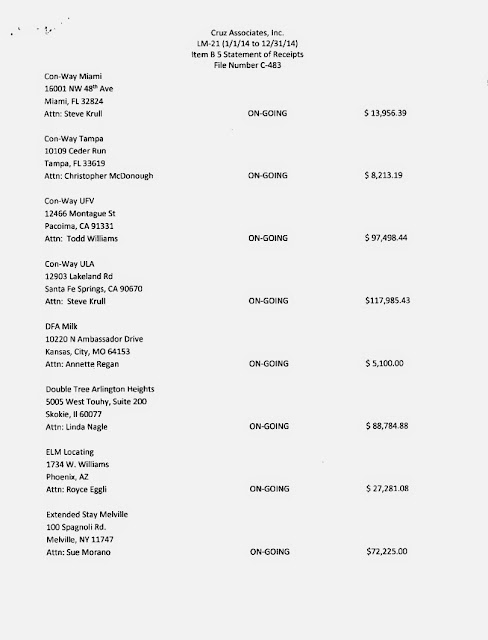 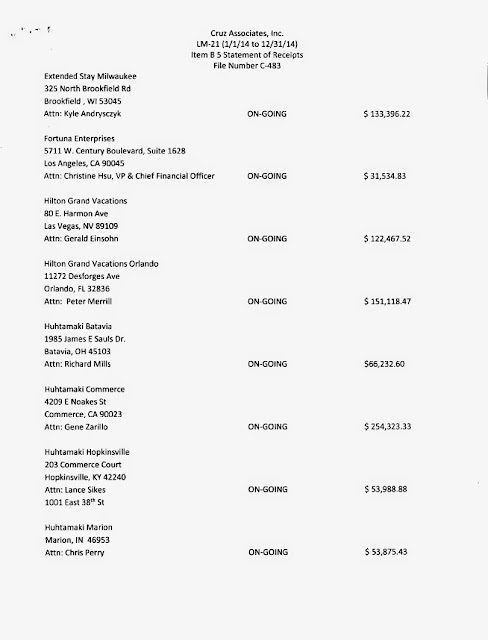 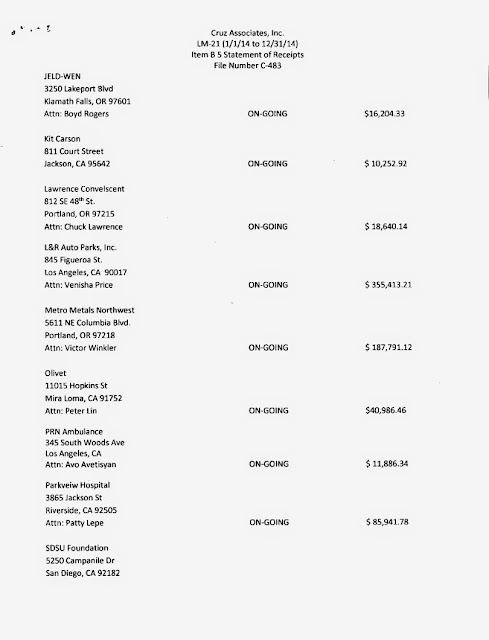 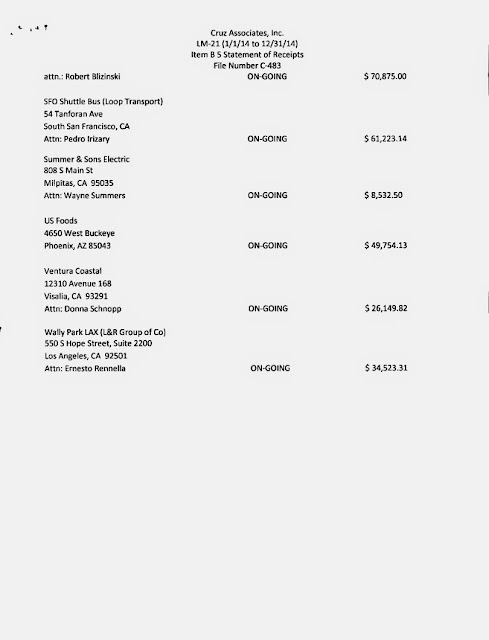 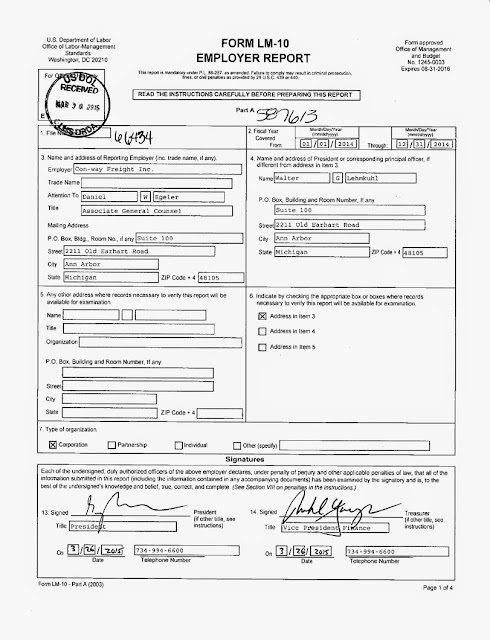 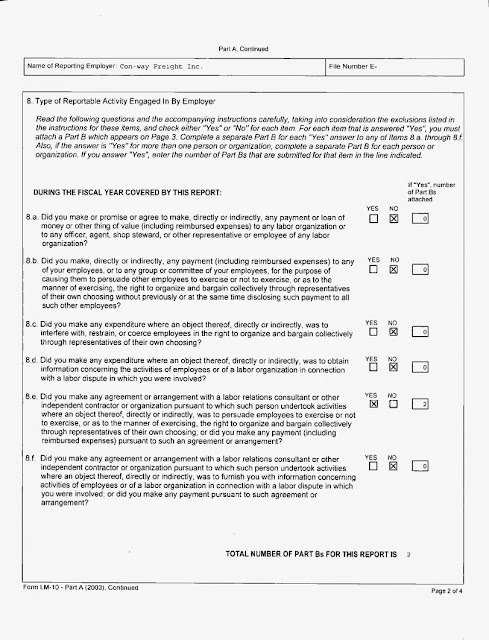 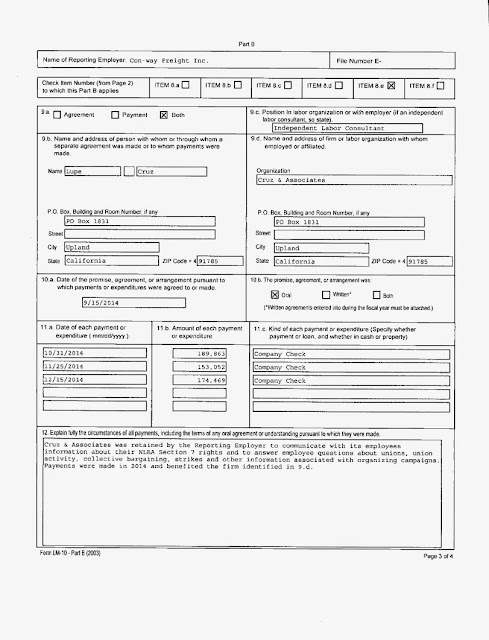 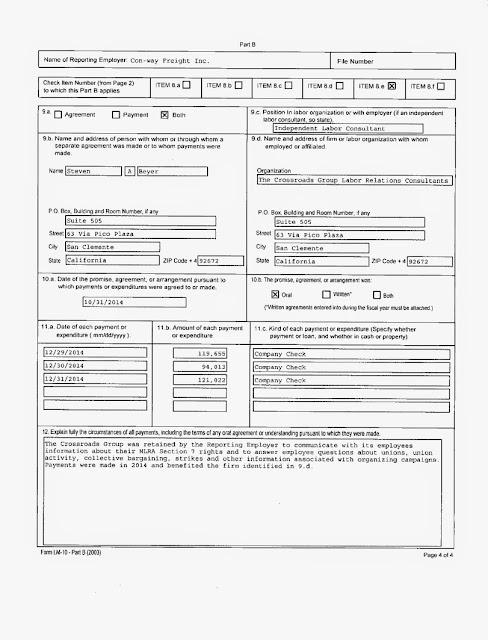 Posted by Conway/XPO Employees at 4:36 AM 11 comments:


Even though private employees have a federal right to organize a union in America, it's not always easy. Many employers hit the panic button when they hear the word "union" and hire a union busting consulting firm. These are firms that specialize in scare tactics, misinformation and intimidation.

The History of Union Busting - From Baseball Bats to Brief Cases

Years ago, when workers in America tried to form a union the company would call thugs in to beat up workers and intimidate them. Over time this industry evolved into a multi-billion dollar cottage industry and today's union busters use brief cases and wear ties.

From the moment a union buster steps onto a company's property he takes control of labor relations. It's his job to spread fear in an orchestrated and carefully planned campaign. Often times, the employer pays thousands of dollars per employee for the union buster to keep the union out. To some employers, it's not about the money it's about the power and they'll spend as much as they need to in order to prevent employees from exercising their federally protected rights.

A union buster is a snake in the grass who goes to bed at night dreaming of ways to violate employees' rights. Sometimes employees don't even see the union buster during a campaign so the snake can avoid filling out financial disclosure forms with the federal government. The union buster has a whole bag of tricks that he uses to spread intimidation and misinformation. Unfortunately, all of his tricks are based on lies.

Sometimes the union buster has a supervisor or member of the management team read from a "script" in front of workers in an attempt to show how "restrictive" things will be if the union is voted in. He will tell employees that if they have a union, employees won't be able to communicate with supervisors and everything will be military like.

During a union campaign, the union buster will have management try to convince the employees that they won’t negotiate if the union is voted in. The fact is, the federal law says the opposite. Management will negotiate because they have to negotiate with employees. It is an unfair labor practice for management to refuse to negotiate or even bargain in bad faith.

The union buster will also pretend like they might actually negotiate standards down at the bargaining table. But statistics from the Department of Labor say otherwise. Employees who negotiate collectively with their employers have higher salaries on average than their non union counterparts. In addition, safety is typically higher and turnover is typically lower at unionized facilities.

Bargaining unit employees vote on the final agreement and most employees won’t vote to cut their own standards.

Scare tactics are a big part of the union buster’s campaign. They will have management talk a lot about strikes and act like everyone who organizes a union ends up on strike. The truth is, less than 2% of all contract negotiations end in a strike or work stoppage. If management were really trying to get the facts out they would talk about the 98% of bargaining that ends in a mutual agreement between the parties.

When the company states that a strike is imminent if employees organize they are breaking the law. The union doesn’t force anyone on strike. A strike is a decision voted on by the employees. In the 2% of contract talks that end in a strike a majority of employees voted to take action.

When employees begin to form a union, management suddenly becomes concerned about how you spend your money. They will exaggerate the amount of dues that members pay say the union just wants your money. What they won’t tell you is you don’t have to decide if you’re going to become a member and pay dues until after your contract goes into effect. If the improvements in pay, benefits and fair treatment aren’t worth your dues then you’re probably not going to join.

The union buster will train supervisors to act like they are worried that paying dues is a waste of your money. But when you think about it, they really aren’t concerned about how you spend your paycheck. It’s OK with them if you give it all to the church, blow it at a casino, invest it in the market or buy alcohol and cigarettes or anything else for that matter. They don’t care because they know it’s none of their business. The only reason they care if you’re paying union dues is because they don’t want you to organize and bargain collectively.

Lie #5 Just Give Us One More Chance

The union buster also trains supervisors and managers to beg for one more chance. They’ll say they didn’t know that employees were frustrated and now that they know they want a chance to fix the problems. They’ll say the company is one big family and they need just one more chance. Supervisors will start treating employees better and show new concern for their well being.

The union buster knows that if the union is voted down, the employees can’t file for another election for a year and that buys them time. Most employees who give management one more chance realize soon after the election that they’ve been lied to. Asking for one more chance is managements way of guilting employees into voting no in order to retain complete control of conditions and standards.

The union buster is a pro at the whisper campaign. They’ll get supervisors to whisper promises of promotions in employees ears or promise better pay if the union is voted down. They’ll give special treatment to certain employees if they turn against the union. But the special treatment will end on election day. Many employees who were tricked with promises find themselves treated just as poorly as their co-workers after the union loses an election. 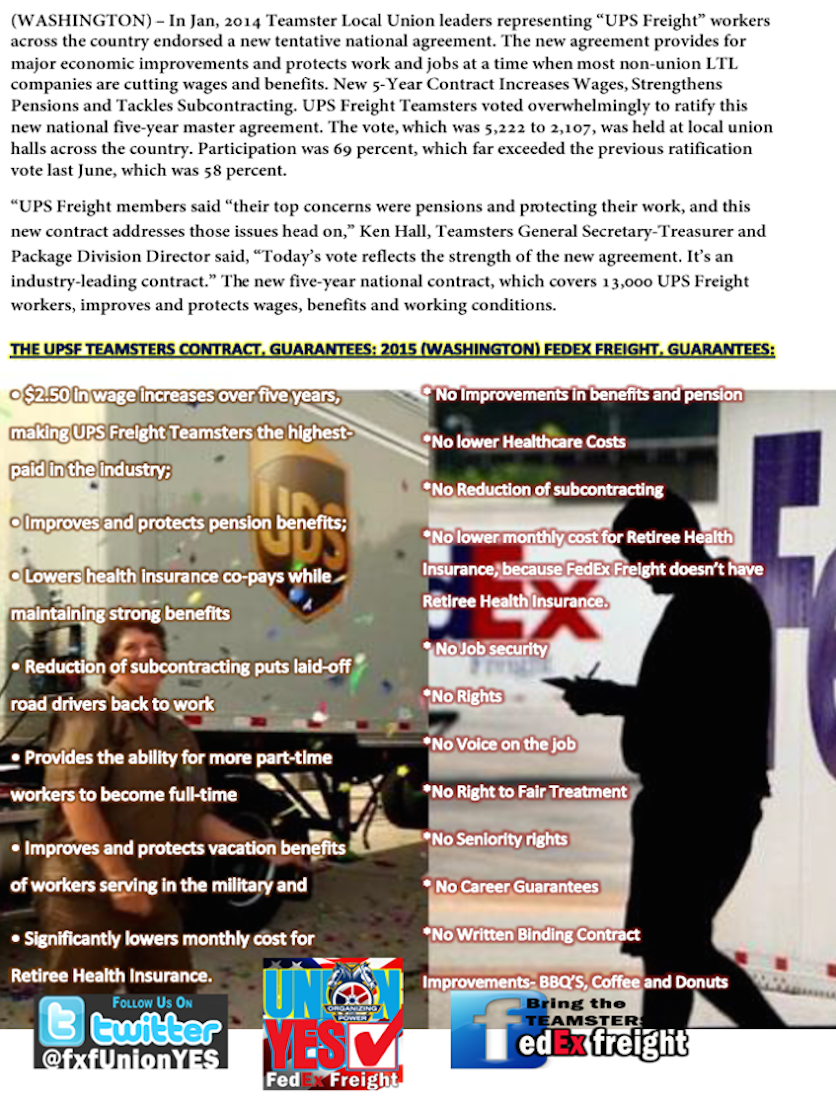