Don Anderson is a man that failed as a driver and as a dock worker. He didn't have the work ethic to make it in either position. Lazy and not worried about safety. He used to use a radar detector in his tractor. That's the type f man he is. After not cutting it, he somehow ended up with a management position. Now, he's been pushing hard on the surveillance cameras that go in the tractors. Disguised under the false pretense of safety. It's nothing more than a tool to intimidate the drivers to up production and to invade their private conversations. He has been going around warning drivers that they will use the cameras and begin to terminate drivers. What could be safer than a driver that is worried about everything but controlling the vehicle properly? Drivers will be penalized for not shifting right, letting the RPMs go to high or for speed. A safe driver should feel comfortable doing his work and not be worried about everything under the sun that Conway can use to terminate them. Don Anderson stands for everything Conway is. Disgraceful, Hypocritical, and Unethical.

Posted by Conway/XPO Employees at 10:19 AM No comments:

Labor Day this year is about workers everywhere who are fighting back.
Over the past week, thousands of low-wage workers have walked off the job to demand a living wage and the right to unionize without management intimidation. The brave workers in the retail, fast-food and warehouse industries have been joined by increasing numbers of their coworkers -- and now, truckers.

This week Los Angeles port drivers who want to join the Teamsters waged a powerful one-day strike against retaliation from the company for organizing. Two days later, fast-food workers waged the largest national strike in that industry, with workers in 60 cities participating. Walmart retail and warehouse workers, along with hundreds of low-wage workers employed by government contractors, are staging massive walkouts with increasing frequency.
Outside of the workplace, Americans are fighting to reclaim rights stolen from us with the passage of right-to-work for less in Michigan. Hundreds have been arrested in Wisconsin and North Carolina because they are fed up with the vast right-wing conspiracy against workers. People are pushing back against ALEC and its drive to crush unions, kill public education, suppress voting and undo workplace rights that people fought and died for decades ago.
On the first Monday of every September, our nation honors the contributions and sacrifices of millions of working men and women. This year’s Labor Day comes on the heels of the 50th anniversary of the March on Washington for Jobs and Freedom.
American workers are not alone. Some 200,000 workers in Colombia are on strike against unfair trade agreements and poverty. In Europe workers have been mobilizing and waging general strikes against the austerity agenda that is holding the continent’s middle class hostage.
It is struggles like these that have characterized the American labor movement, which has brought working families a long way in this country’s history. The weekend, the 40-hour work week and laws against child labor are just some of the things that labor has won for American workers. But we also have a long way to go.
Many often forget that Dr. Martin Luther King’s great “I Have A Dream” speech was delivered at a march for jobs. This Labor Day gives us a chance to reflect on that message and the ongoing movement for economic justice in America.
This Labor Day is about remembering labor’s triumphs and the workers without whom society would not function. But it’s also about solidarity and celebrating our movement – a movement that today is alive and well and fighting like hell for a strong middle class.
Posted by Conway/XPO Employees at 2:07 PM No comments:

August 22, 2013 Move To TeamCare Ensures Members Maintain Full Coverage
(Washington, D.C.) – UPS announced on august 21.2013 a change in its health care coverage for spouses of nonunion employees. Going forward, UPS will not cover spouses of nonunion employees who are eligible for employer coverage at their workplace. This decision does not impact the health care coverage of Teamsters at UPS.
The recently approved national agreement moves more than 140,000 UPS Teamsters from the UPS company plan to TeamCare, ensuring that Teamster member’s health care benefits are protected for the full five years of the contract.
Posted by Conway/XPO Employees at 4:56 PM No comments:

Reddaway Teamsters strike to gain recognition comes to an end

from:THE PRESS-ENTERPRISE
http://www.pe.com/business/business-headlines/20130819-labor-trucking-strike-ends-for-fontana-depot.ece
Posted by Conway/XPO Employees at 10:19 AM No comments: 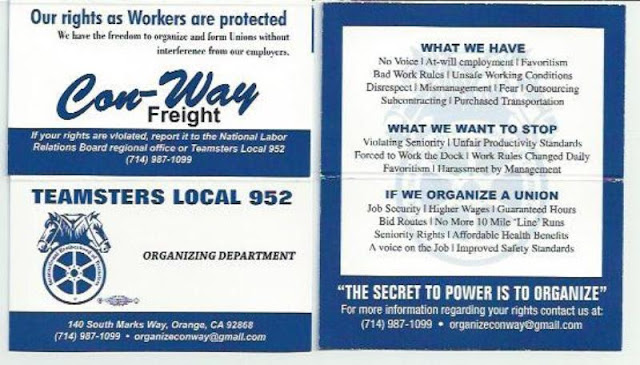 Posted by Conway/XPO Employees at 6:17 PM No comments:

FREQUENTLY ASKED QUESTIONS ABOUT THE UNION

How much are initiation fees?
There are no fees to newly formed or organized groups,
Conway freight would fall under this. Union dues are 2 ½ of our Hourly wage.
So top of scale drivers at southern California is $23.55.so their Union dues
Would be $58.87/month. These dues enable the union to have the resources
To stand up for fair wages, good benefits, better working condition.
How common are strikes?
It takes a 2/3 vote to go on strike by members not the local union
Representing us. However, 99% of the time there no strikes the ibt Understands
That strikes are not only a burden on the company but also a burden on its members.
Can a member track how their union dues are being spent?
The lm-2 report is a detailed report of how the union spends its money.
It is always available to every union member.
I heard that unions put companies out of business.
How will organizing affect Conway?
Bad management put companies out of business the Teamsters and their
Members are only successful when the Company is successful so they want
The company to profit. A good Example is YRC where the members renegotiated
Their contract to keep Company afloat.
It’s all up to us, Conway employees!
Stand up and be counted!
Posted by Conway/XPO Employees at 9:29 PM No comments:

Here’s a comment from one of our workers at the Santa Fe Springs terminal, it shows the right frame of mind that every one of us should be in:

“I work for Conway at the Santa Fe Springs terminal and the way they treat people there, it seems like modern day slavery. It’s ridiculous how the workers let the company get away with it. We live in America! We need to get together and become Teamsters! Then we’ll show them.”

All of our terminals in Southern California should be ready to mobilize and begin this organizing campaign. We need to recruit all of the terminals and strike fear into management to let them know that this union movement is for real. We should all be ready for a fight to get what we deserve. We deserve a better wage, affordable and better health benefits, a pension, job security, and a voice on the job. This is the only way to eliminate wage theft and favoritism. We will let our seniority decide what routes we will take instead of letting it depend on the mood of a supervisor. If our equipment is unsafe or if the freight is not loaded in a safe manner then we can speak up without fear of retaliation or being terminated. We decide what is safe.
If you’re undecided or need more information about this campaign contact your committee leader at your terminal or a union organizer at Teamsters Local 952 and they will help you understand why the union is the only way to get what we need.