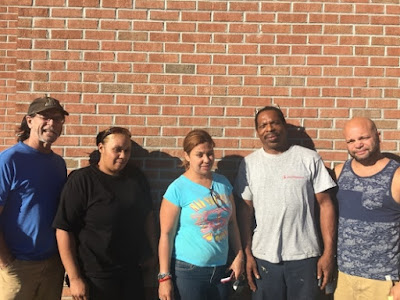 Posted by Conway/XPO Employees at 11:47 AM

Wow New Haven Connecticut that's the way to do it to have a better life and a better future I mean Brad Jacobs is having a great life and he's got a contract making millions of dollars so why can't he share his fortune with the actual people that make his fortune for him the blue collar class are the ones that make the rich Richer without us they couldn't have their 5 million dollar yacht the blue collar class are the ones that make the people like Brad Jacobs Rich $$$ but yet they deprive us of having something a little better and a secure future Wilton Connecticut well deserved good luck stand together when the time comes.
We cannot change anything unless we changed it together.
Miami Teamsters Local 769 Certified Terminal.

My friends in Laredo Texas every dog has its day and he's just one of those dogs with a lot of fleas that will get his day it's just a matter of time remember Brad Jacobs needs his drivers more than Management it is almost impossible to get good drivers with experience, to replace them but management he could fire them and rehire them anytime he wants it's just that simple, so my friends hang on in there Ted Garcia will be one day yesterday's news good luck Laredo you're almost there,
Miami Teamsters Local 769.

XPN TM is abscess with numbers! That's all that matters to him so I can see him fudging them... They usually fire management for fudging numbers

Why should they stop now we been getting screwed ever since ccx disappeared.

What do you mean they don't communicate ?We had a two minute video this week.

Start asking managment at all terminals why is it we the drivers bring in the money and yet they and the supervisors get the big bonus?

Because the company wants it that way, although everyone in the industry knows that the real driving force behind the company are thier Driver's and thier Dock-worker, but like the F****ed up world we live in and the Dirty Politics of the company that's why Management???
Gets Bigger Bonus not us Midioquer worker's that are Actually making the Real $$$ for the Company. It's about time we have a better life and future to give back to ourselves and our Families.