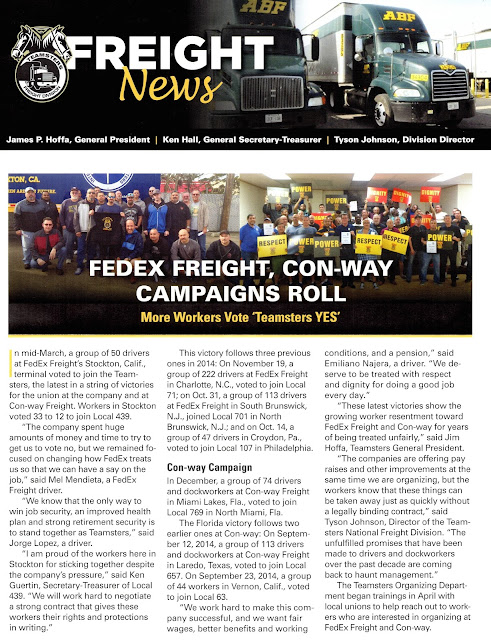 Posted by Conway/XPO Employees at 10:53 PM

This is Great! Congratulations to all the workers who stood up against numbskull and his thugs. They showed no fear, and a willingness to provide a better life for there families.

I agree Conway struggling to unite! All the new drivers and dock workers are all buying in to the Conway bullshit. They have no idea how bad things are going to get. They like the Hot Dogs and Frito's Conway give's them to trick them into believing they have a good paying job and health Benifits!

What's a word with Xau anybody know ?
Did con way use kooblue and stop the fire already
Never too late Xau

Conway struggling at everything!!!!!

Conway still hiring??I wonder why that is??Anyone have any idea of why Conway still looking to hire?

I think cuz they plan to fire pro Union

Here is some info on FedEx.I wonder if Conway has the same tax rules??FedEx
Made $5.7 billion from 2010-2012 and didn’t pay a dime in federal income taxes. Got a tax subsidy of $2.1 billion. Received $10.3 billion in federal contracts from 2006-2012.
Also here is how companies like Conway pay for taxes.The corporate malfeasance tax dodge. When you get a parking ticket or a speeding ticket, come tax day you are out of luck because such fines are not tax deductible. But if you are a corporation, the costs of corporate crimes and abuse are most often tax deductible, in effect forcing other taxpayers to subsidize their abusive behavior. When Bank of America paid to settle claims that its foreclosure practices violated the rights of customers who lost their homes or when ExxonMobil paid $1.1 billion to settle claims for the Exxon Valdez oil spill, their tax deductions of these costs meant the rest of us picked up some of the tab for their harmful practices...

The paying business to do what it would do anyway tax subsidy. Several companies profiled were able to sharply cut their taxes by taking advantage of special tax write-offs associated with the 2009 stimulus bill. Corporations have long been allowed to deduct a portion of the cost of their property and equipment over the life of the asset. But the 2009 law allowed companies to immediately write-off 50% of the value of the equipment in the year the purchase was made, regardless of how long the equipment was expected to last. While the intent of the legislation was to get businesses to spend more to stimulate the economy, in reality most companies got enormous tax breaks for doing what they were going to do anyway. FedEx and Verizon are big beneficiaries of this subsidy as they buy aircraft and build cell phone towers.

Bank Bailout, round 2. America’s taxpayers spent more than $2 trillion to bailout America’s financial institutions during the recent banking crisis. But the terms of the bailout did not address whether the financial institutions involved could use the losses incurred during the crisis to reduce their taxes for years to come, in effect, giving them a second bailout. Bank of America used its losses as a get-out-of-taxes free card. Many other banks and financial institutions did the same.......
Im not sure but I think Conway was one company that asked for a bailout..Ill have to look it up and see if I can find how much money they got from our paid taxes.

Conway management don't care if you're pro union or not pro union they will find a way to fire your ass if you're not productive or if you're getting old. don't forget the point system the draconian point system or safe policies have been held back due to the union organizing once the union movement is over the first casualties will be the non union supporters

All the Hiring is because Conway is getting ready to do a rash of firings!! All you No voters are at risk just as much as us supporters. This is what you voted for. low wages, bad insurance, and No job security! Conway will start letting workers go very soon all top pay older drivers who are not producing all drivers near retirement, and anyone using too much health insurance driving up health cost!! That also includes your Family members! So if your one of these workers get you resume's ready!!

How much time and money does this company wast on these meeting's I'm tired of listing to all there the bull shit!

San antonio texas MECHANICS dont fix anything and the people up stairs dont care,like i said before we have the worst equipment ever and you people upstair you supost to fix a list this problem BUT like always you can not fix any thing

You guys lost give it up!

Ceo resigned greg something resigned today. It's on the nasdaq. He stepped down. Then why all this bs that u don't want a union if your not staying. We are here to stay so give us a pension or a million dollars a year so I can also step down five years from now

Fantastic Numbskull is gone how about that for a win!!

Really?? You think we the workers lost??then why did Greg get fired?Now we have a new slave driver.Conway is about to turn up the heat on all of us.specifically all you no voters.

Hey don't blame the mechanics.Management is all about score cards they don't care about safe equipment.Its all about run time not down Time.

What does that mean, turn up the heat? Can you see into the future? How do you know what is going to change with a new guy?

I think what the guy is saying by turn up the heat is.That Dagnese is going to push even harder for the lean process because I think I read on his bio that his a lean expert.and what does Conway want?what are they pushing for?..Im sure someone here can answer those questions.