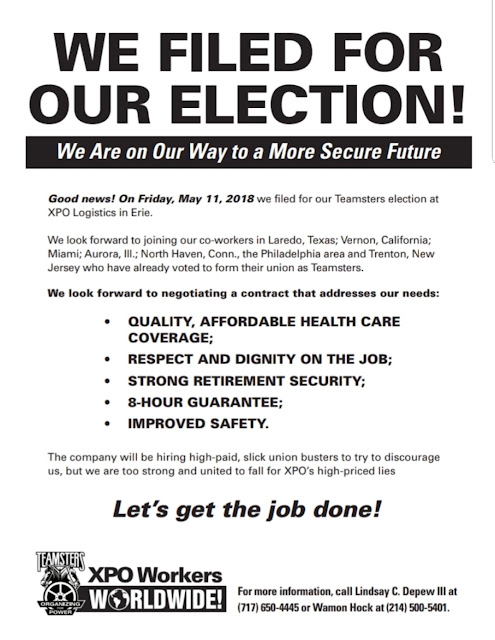 Posted by Conway/XPO Employees at 9:14 PM

They feed us cucumber spaghetti today for reaching our safety goal for April. Our terminal managers wife made it. He couldn't even order food for us from a restaurant. How cheap these guys are now. And it was gross to. Like nobody ate it except him. We need the Union up in hear.

That’s the dumbest fucking thing I ever herd! This company has hit rock bottom

About as dumb as having to fix your pallet-jack!

As someone who has been through the Union Buster experience, I am extending a word of caution to you all. Every word out of their mouth is either an outright lie or a spin on a half truth. They get paid MILLIONS of dollars to keep you in your place. If you have any doubts about what I'm telling you, take the time to ask someone who has been through it. Contact your organizer and he will put you in touch with me and I will do my best to help you understand what you're in for. I will help you sort through the truth and lies and give you some perspective on how and why you should cast your vote. Its a totally secret process and no one will ever know that you signed a card or how you voted.

Not confronting the union buster in isolated places or one by one,cause anything you said or do,they turn everything against you and the company support them.

You don't need to confront them. Just nod politely and yes them to death. Then, vote YES on the damn ballot for a better future.

Union busters don’t give a damn about workers. their goal is to lie and make sure workers vote against better working conditions, better benefits, and respect.

Let's get this moving USB we need the union for the pension we had one before . We can get a better one now.

Nurses, police, city workers ,fire department have a pension why can't we have one, union yes USB

Going on 20 yrs now with con/xpo nothing to show for it.the pension that I have sucks not enough to live on when I retire going to have to get a part time to make ends meet . USB wake up we need the union now

Wake up USB , we need to start signing cards to see where we stand ,union all the way for better retirement .

Wake up USB ,dont you guy's see all the old driver's .they should of retired already but can't no pension

Wake up USB , 401k plus a pension = A GOOD AND HAPPY RETIREMENT STRESS FREE.

KEEP YOUR BALLS AND YOUR WORD , VOTE YES, LIKE MIAMI

Grab your balls to your hands my brother and vote to are future.

Wake up USB, LET'S VOTE UNION NOW , BEFORE IT'S TOO LATE. WE WILL BE LEFT BEHIND

Good news for Aurora,Illinois
The US Court of Appeals for the District of Columbia enforcing xpo to bargain with the drivers at the Aurora, IL Service Center with Teamsters Local Union 179.

what's going on at UKC?

Wake up USB , when are we going to start signing cards?

Our t.m. has his favorite NFL team flag on his office wall,, guess he never heard of the NFL players union.

XRF needs to sign cards now. When is enough enough???

Is the vote still on for Friday

the Teamsters have withdrawn the petition -- guess they did not have the votes...

UDV needs help bad. Another TM just quit Tuesday an FOM is guitting July 5 so she can get her holiday pay. All the rats are jumping off the ship before they go down with the wreck. Can not hire anyone apparently is known as a sh_t hole.Corporate needs to come in with the unioun to get this dump cleaned up. Maybe we could ask God to because the workers have no clue