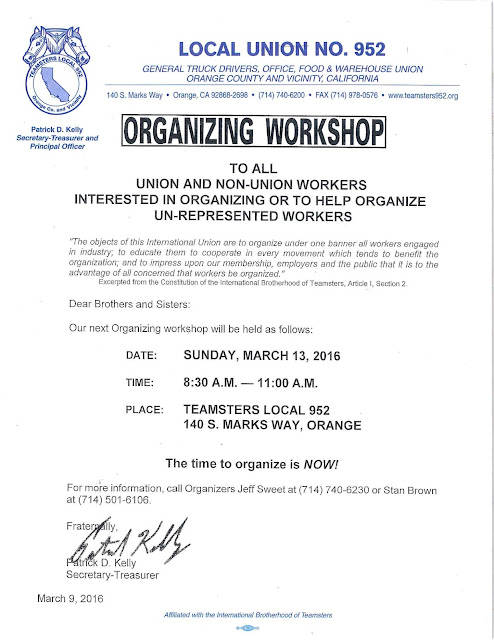 Posted by Conway/XPO Employees at 11:06 AM

AWESOME LET'S EVERYONE SHOW OUR SUPPORT TO HAVE A BETTER LIFE AND FUTURE FUNNY THING IS THAT ALL THE EXCUITIVES OR TOP EXECUTIVES HAVE A CONTRACT BY THE COMPANY SO THEY WON'T BE STRANDED OUT IN THE COLD HOW FUCKING GREAT IS THAT! I'VE SET IT BEFORE AND I'LL SAY IT AGAIN.
WHAT'S GOOD FOR THE GOOSE IS GOOD FOR THE GANDER. BUT THEN AGAIN IN THE WORLD OF POWER MONEY AND POLITICIANS THAT BACK UP AND PAY MILLIONS OF DOLLARS $$$ SO WE CAN BE (ALL AT WILL EMPLOYEES) F****KED YET BUT TRUE ALL THOUGH THIER NOT,AT WILL THIS IS WHAT WE GET THE WORKER'S THE SHORT END OF THE STICK.
MY FRIEND'S WE CAN NOT CHANGE ANYTHING UNLESS WE CHANGE IT TOGETHER.
LOCAL UNION 769

LADIES AND GENTLEMEN THE CUTTING OF PERSONAL WILL CONTINUE TO BE DISMEMBERED APART UNTIL YOU SEE IT FOR YOUR OWN EYES !!! PEOPLE WAKE THE F****K UP AND SMELL YOUR FUTURE IT IS NOT WITH XPO LOGISTICS ITS WITH THE UNION.
THEY WILL HAVE YOUR BACK THEY WILL PROTECT YOU FROM UNFAIR LABOR PRACTICES FROM YOUR OWN COMPANY DON'T YOU GET TIRED OF BEING AN ( AT WILL EMPLOYEE ) ALL THE TIME OR IS IT THAT YOU LOVE BEING DISCIPLINED WHEN EVER MANAGEMENT MAKES THEIR MISTAKE AND WANTS TO PIN IT ON YOU REMEMBER THEY WILL TO CLEAN THEIR HANDS WITH THEIR MISTAKES WHO'S TO SAY SO! YOU ? LET ME TELL YOU ( THE UNION WILL BE THEIR FOR YOU WHEN YOU NEED THEM OF COURSE WE NEED A CONTRACT! YOUR PAYING ABOUT $40-70 $$DLRS A MONTH FOR A PROFESSIONAL LAWYER OF THE UNION THAT KNOW YOUR RIGHTS AND THE LABOR LAWS MY FRIEND. SO PLEASE WAKE THE F***K UP PEOPLE, IGNORANCE WILL DEFY YOU ALWAYS !

Great meeting today @teamsters local 952 we're finding out more info about xpo logistics independent contractors and the plans xpo got for us.

Aren't the teachers under a union?

Here in chicagoland, just the same story as conway was. Also heard from Milwaukee that they are getting write ups for "talking" and not working on the dock. Really!! Talking, did they listen in on conversations?

It's starting in California at USB terminal mike corbel going after DSR on travel time GPS stops per hour what they consider off route ..teamster contracts have no production quotas just do your job without all the BS write ups paper trails just a tool for XPO to fire you UNION STRONG

Rampant favortism in Milwaukee. Saving runs for the chosen few. Junior drivers assigned new trucks. Dont know how they can catch anyone talking, can never find an FOS. Have drivers not driving, just dock and they are hiring more dockworkers.

Rampant favortism in Milwaukee. Saving runs for the chosen few. Junior drivers assigned new trucks. Dont know how they can catch anyone talking, can never find an FOS. Have drivers not driving, just dock and they are hiring more dockworkers.

Here in NMF the Favoritism is still rolling on, but they call it now FLEX DSR'S they are below most of the Seniority DSR'S but FLEX makes them $$$ So they take out Starting Times and they bring in FLEX DSR'S a Sack of Shit it's Management Bullshit way of having their Fav's coming in earlier, WE ALL KNOW AND THINK IT'S A LACK OF DISRESPECT TO THE SENIOR DRIVER'S. F****K this Bullshit.
Other drivers are getting some hours while the 2-3 top flexible DSR'S are making all the hours this is because Management Administration on these DSR'S suck and they don't give a Shit, because they don't have the slightest clue of what their doing. Instead of giving these DSR'S up to 10hrs they let them make the hrs while other DSR'S are getting sent home early, THE ADMINISTRATION IN MIA SUCKS. WE ARE ALL WAITING FOR XPO TO COME IN SO THEY CAN SEE THE MISTAKES THEY MAKE EVERY DAY.

The Truth is when you have Power and Money you can BUY TIME! and that is what Conway was doing passing all the Bullshit left behind on to XPO Logistics to pick up Dirt and continue with the Bullshit, but hey it's the same Shit we're still fighting for what we believe
and so is the Company. There will be a Cost of Living Increase for all of Conway's Employee's, we will see if the Executive of XPO LOGISTICS Mr Brad Jacobs will be Dignified with Honors Enough to give the cost of living Increase to all of his Employee's Nationwide on April 11th like he has Promised only to be Seen, so that everyone employee that he has can Truly Respect Mr Jacobs we're sure he's a man of Dignity not like X-CONWAY?.

THE FIRST PLACE WE LOSE OUR BATTLES IS IN OUR OWN MIND.

My brothers we need each other

AND THE FIGHT CONTINUES FOR THE 1ST AMENDMENT FOR THE LABOR WORKERS TO HAVE A BETTER LIFE,FUTURE,WITH DIGNITY AND RESPECT, WE SHOULD ALL VOTE AGAINST FOR A FREE STATE OF UNION IN FLORIDA!!! ( NOT A RIGHT TO WORK STATE ) !!! LIKE THEY DID IN WISCONSIN.
WHEN WILL WE STOP THESE DIRTY POLITICIANS OR THE C.E.O'S OF AMERICA OR THE RICH $$ THAT KEEP TAKING ALL OF OUR HARD WORKING MONEY $$$ IN PAYING OFF WHOEVER THEIR PAYING OFF TO KEEP THIS STATE A ( RIGHT TO WORK STATE ) WE THE PEOPLE ARE F*****KEN! DONE!WHY DON'T WE TRY TO TAKE ALL THAT MONEY FROM THE RICH AND SEE WHAT HAPPEN OR TELL THEM THAT THEY DON'T NEED SECURITY OR A CONTRACT OF THEIR JOBS??? ASK THEM HOW THEY WOULD FEEL! UNION ALL THE WAY!!!

YOU DON'T WANT TO WIN WITH 51% U NEED TO WIN WITH AT LEAST 70-80% OF THE VOTES WHY BECAUSE FOR THE RECORD FOR YOU UNION BUSTERS OUT THERE YEAH YOU KNOW WHO YOU ARE, NOONE IS STUPID EXCEPT THE IGNORANCE OF IN YOUR OWN MIND, AND THAT'S WHERE YOU LOSE YOUR FIRST BATTLE. THE WILL SICK THIER DOGS ON YOU WHICH IS THE COMPANY’S LAWYERS AND THEN IT WILL TAKE YOU FOREVER TO GET CERTIFIED, JUST LIKE WHAT'S HAPPENING WITH LAREDO TEXAS. EVENTUALLY THEY WILL GET IT IT'S JUST A MATTER OF TIME THEIR JUST WAITING TO SEE WHO JUMPS OUT OR WHAT HAPPENS NATIONWIDE WITH OTHER TERMINALS THAT'S ALL IT'S JUST A GAME.