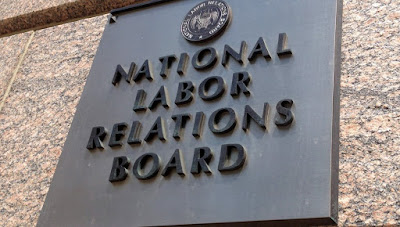 The National Labor Relations Board has ruled that an employer who warned workers before a labor election that getting a union could hurt business was making an illegal "veiled threat."
The case illustrates the pro-union direction under President Obama of the board, the federal agency that enforces labor laws and that has made several moves in recent years to strictly limit what employers can say regarding unionizing.
In a 2-1 decision, a three-member panel of the board said Tim Krise — the vice president of Student Transportation of America Inc., a Bristol, Penn., school bus company — violated the rights of his employees when he reportedly told them during a voluntary meeting that the company "could walk away" from its contract with the Bristol Township if operations "became too costly." A month after the November 2013 meeting the company's workers voted 24-23 in a favor of joining the Teamsters. Two ballots, however, remain contested and have not been counted, leaving the election in limbo.
Labor board members Kent Hirozawa and Lauren McFerran sided with the union. "We find that employees could reasonably infer from Krise's statements that, if the petitioner (i.e., the union) won the election, the employer's costs necessarily would rise and cause the employer to walk away from its contract with the township, leaving the drivers out of work. Although Krise did not directly threaten employees with job loss, a threat need not be direct in order to be coercive," they wrote.
The board ordered the remaining contested ballots to be opened and counted. If they showed that the union won, it would be recognized. If the union did not win, then a new vote must be held.
Steve Bernstein, a labor lawyer with the management-side firm Fisher and Phillips, said the board has long taken a "dim view" of employers of making negative predictions regarding workers forming unions.
"I will say, though, that board seems to be sliding that spectrum further away from free speech and expanding the scope of comments that are unlawful," he said, noting that employers previously often got the benefit of the doubt in ambiguous cases.
The board's decision reversed an earlier one by an administrative law judge who, applying long-held board precedent, had earlier ruled that Krise's remarks were non-objectionable comments on the economic realities of running a business. The judge further noted that at the same meeting he said the company "wanted to be in for the long haul," indicating that management was not thinking about closing down.
A key part of the case, the majority said, was Krise's apparent claim that it was written into the contract with the township that the company could walk away if its costs climbed too high. However, the contract actually allowed the township, not the company, to walk away in that situation. The contract also required the township to offset half of any additional higher labor costs the company would face should its workers unionize.
"Given that Krise's statement about the contract was inaccurate and that the contract in fact provided for additional support from the township in the event of unionization, there was no objective basis for his veiled threat that the employer could abandon its contract with the township due to rising costs that he implicitly associated with union victory in the election," Hirozawa and McFerran said. Since there was no basis, the comments were not protected speech.
Board member Harry Johnson dissented, arguing that the facts were too vague to draw such conclusions and likely pointed in a different direction. He said Krise "either misstated a provision of the employer's contract with the township or was misunderstood by the [sole] witness" who testified that he said that.
"Furthermore, as the majority concedes, Krise never mentioned laying off employees or closing the facility. In fact, to the extent Krise mentioned any future action, he told employees that he was in it 'for the long haul' and that he wanted the facility to succeed," Johnson noted.
Under President Obama, the labor board has often narrowly interpreted comments from employers as threats. In 2011, it filed an unprecedented complaint against Boeing for opening a new plant in South Carolina. The board argued the move amounted to retaliation against the union that represented Boeing's machinists in Washington state, although the new factory was an expansion and no workers lost their jobs. The complaint was based primarily on a company official's statement that "strikes happening every three or fours years in Puget Sound" had influenced the decision to locate the new plant in South Carolina. The case was later withdrawn when Boeing settled with the union.
In March, the board's general counsel issued new directives strictly limiting what companies can and cannot say in their employee handbooks. The new rules argue that even seemingly innocuous company rules such as prohibitions on "false or misleading representations about your credentials or your work" would now be considered labor violations.
Posted by Conway/XPO Employees at 1:37 PM

So what's the latest at UWS??

Vote is set for the 21st of the month, seems we are holding strong but the company is handing out the sweetest kool-aid they got

Thx for the update! Good for you for standing strong! Good luck UWS

That kool-aid is all lies.Its all smoke and shit.I hope you guys stay strong all the way threw.we need to stop Conway and the management's from abusing and harassing us.The only way is to get united and vote for representation.You guy at UWS can do it.Just stay together and informed.GOOD LUCK TO YOU GUYS.

Show us how it's done UWS!! Stay strong stand together. Lean on each other. if someone starts to drink the kool aid, because of Fear support them help them see the truth!! We are un breakable if we stand together! Good Luck UWS

Are the csr's and weights and measure included in Miami and laredo ??? Will they be teamsters also

LHO,LDA and LAREDO STICK TOGETHER any information you need guys, just ask line haul drivers and we can enjoy the union all together.

NEXT TERMINAL WITH CERTIFICATION IS GOING TO BE CALIFORNIA PRETTY SOON,THANK YOU CALIFORNIA FOR YOUR SUPPORT,THESE IS NOT THE END,IS JUST THE BEGINNING.

City drivers at most barns barely getting 40 hours. ConJob showed us didn't they. Where's the pay raise now. Shitty insurance and no retirement. The sheep have been herded. TEAMSTERS please help these drivers see the light that it's only to get worse

On a different note, The Company has disclosed insider buying and selling activities to the Securities Exchange, The Securities and Exchange Commission has divulged that Lehmkuhl Walter G, officer (EVP & President) of Con-Way Inc., had unloaded 6,700 shares at an average price of $44.56 in a transaction dated on March 9, 2015. The total value of the transaction was worth $298,552.....

GREG dumped alot of his Conway shares??To me, it seems like he knows that Doug isn't good BUSINESS.When will the rest wake up and see that his leadership is bringing the business on a down hill spiral?We need to get representation, because we the workers are going to end up like ENRON employees.Jobless and broke

the dark side said...

How ironic of insider trader. About the same time Lemkuhl dumped his shares so did a few regional managers and several terminal managers. Sounds like the whole thing needs to be blown wide open with a full investigation from the trade commission. ConJob definitely in dire need of a new direction and the only way is union! I hope these crooked bastards are held accountable for their actions. UNION BABY!!

Everyone needs to know that he took others with him he just didn't leave alone there's you Ann Arbor ethics for you.

THAT'S GOOD TO KNOW, THANKS NUMBSKULL FOR TAKING MORE LOW LIFE'S,, DIRTY THEIVES & BASTARDS WITH YOU. NUMBSKULL FORGOT THE MOST IMPORTANT ONE & THAT'S GREG STOLASS. GREG NEEDS TO GO BAD. STOLASS IS REALLY LETTING THE SHAREHOLDERS KNOW HE DOESN'T KNOW WHAT HE'S DOING. STOLASS, CUTTING LINE-HAUL, CUTTING CITY DRIVERS, REALLY THAT'S HOW YOU RESOLVED PROBLEMS? IS THESE DECISIONS REALLY ADDIDING THAT PROFIT BACK TO CONWAY'S BOTTOM LINE? EVERY LOGISTICS IS COMPANY IS SURPASSING US KNOW WHAT'S YOUR PLANS FOR GETTING NEW BUSINESS IN THE COMPANY OR BETTER YET FOR GETTING BACK ALL THE BUSINESS WE HAVE LOST TO OUR COMPETITORS?

STOLASS STOP PLAYING TIP FOR TAP GAMES AND GET SOME FUCKING BUSINESS IN THIS COMPANY. START MAKING GOOD BUSINESS SENSE.....COME ON TERMINALS KEEP THE PETITIONS GOING BECAUSE THIS INFANTILE CEO DOESN'T HAVE A CLUE WHAT'S IN STORE FOR FOR HIM.