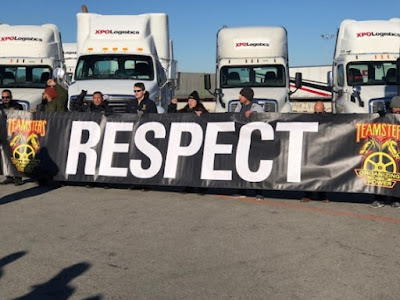 Email: tgotsch@teamster.orgPhone: (202) 624-6911
(Aurora, Ill.) – Drivers at XPO Logistics in suburban Chicago who formed their union with Teamsters Local 179 in October 2016 “marched on the boss” today to demand that the company start negotiating a contract.
“XPO is mistreating us by refusing to come to the table more than a year after we voted to organize as Teamsters, which is completely unacceptable,” said Jose Ramirez, a driver at XPO in Aurora. “First we had to deal with high-priced union busters during the campaign who repeatedly lied to us, now the company has delayed and delayed the start of negotiations.”
This past July, the National Labor Relations Board ordered XPO to stop refusing to recognize Teamsters Local 179 as the exclusive bargaining representative and to start bargaining with Local 179.
The drivers presented management with a letter and signatures demanding that the company start bargaining right away.
“The drivers at XPO in Aurora stood strong and united during the campaign and they continue to remain strong, despite the company’s vicious anti-worker behavior toward them,” said Tom Flynn, President of Local 179 in Joliet. “We will continue to fight on behalf of the drivers to negotiate a strong contract that protects them and their families. The abuse of the workers must stop.”
Founded in 1903, the International Brotherhood of Teamsters represents 1.4 million hardworking men and women throughout the United States, Canada and Puerto Rico. Visit www.teamster.org for more information. Follow us on Twitter @Teamsters and on Facebook at www.facebook.com/teamsters.
https://www.facebook.com XPO Exposed


Posted by Conway/XPO Employees at 5:01 AM

Very helpful information It is the little changes that will make the biggest changes. Many thanks for sharing!

Good informative conference call thanks everyone who participated.

Informing ourselves is how we debunk xpo anti-union lies about our union organizing movement.

Wake up west coast let’s not wait till ulx get certified.

If you need help or have any questions contact us at changeconwaytowin@gmail.com

come on! NBM vote union "yes" and vote no for roy moore

Ladies and Gentlemen i keep hearing the same Sh*****T over and over and over again!lets wait until Miami gets a Contract people that is the biggest bullshit statement I've ever heard don't wait for someone else to make your future you have to make your own decision fight for what you believe and your future so you can have a better life and a better Future, when Brad Jacobs decides to sell LTL you will be left again India oblivious wondering we should have all brought in the Union to secure our lives and our jobs so don't wait don't think about it anymore just go ahead and do it.