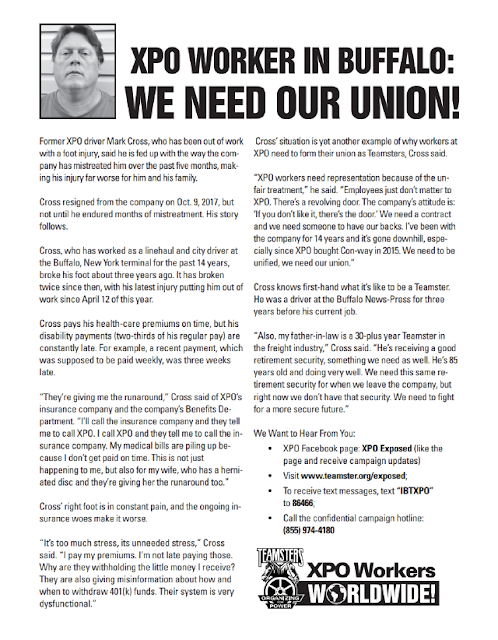 
Posted by Conway/XPO Employees at 2:38 AM

Nothing new. The company will give it's worker's the runaround just to steel from their worker's.
They lie about having integrity. Or Having any kind of commitment to the employees.
But all of you that work here. Just keep on doing nothing. Bradley love's you for it.

Ted Garcia get ready boy with legal charges against you prejudice scumbag, I know you were part of the review of a ULA employee I know the questions you asked you,Wendy and the rest of the other clowns that were on that review board are nothing but scumbags.
That employee appeal board is a joke that’s why we need union representation if we don’t unite together against busters like ted Garcia we won’t have a chance to fight corporate crooks like ted or the new ULA manager who is bringing all his friends from ups to intimidate drivers and dock workers at ULA.

This is the kind of shit that happens when the Working class vote against their own best interests.

A Week long of meets with managers and supervisors upstairs at ula last week for all the terminals and the orange region about leadership. They sure need it!

Guy's you need to burn this Ted Garcia come once and for all he's pure shit supervisors like this that's why the union comes in they don't see it I guess they need morons like this.
Union soon Jersy.

You know they know the shit is going to hit the fan sooner or later the company is just buying time the company would wantor rather spend $1,000,000$$ in one case then to give us $0.50 for the union not to come in that's how much the company gives a shit about their employees arrest my f***ken case!

You know ladies and Gentleman it's easy to say that the company broke the law violated the law of discriminated of the bargaining unit in Miami retaliated against them yet they gave the raises Nationwide but they're still trying to prove in court that they didn't do absolutely anything wrong.

Stand strong brother we are winning the fight.

Hard proof XPO could care less: heavy ass grocery pallets, sort and segregate and bullshit answer when I asked boss for help. Just make our numbers and shut the fuck up. And we don’t need no damn unions, right?

There yo go,the trickle down bullshit being sold again by the repiglicans and the orange rat sewer.

Had our benefits meeting this morning it’s looks like Bradley and XPO continues to take really wish guys will get balls and sign cards and get a say so in what happens.I’ll bet union Barnes lost nothing in new benefits plan

Just pray you never have to go on disability,just keep doing nothing, as every year they take something from us,as our slide to the bottom of the ltl industry continues.